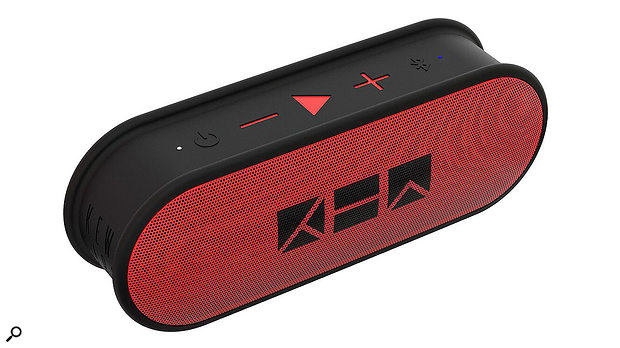 At one time every studio had a 'grot box' speaker to reveal how their material would sound on TV sets and portable transistor radios. But as consumer hi-fi systems, earbuds, headphones and TVs aren't quite so grotty anymore, what, other than your studio headphones, might you need as a consumer reference? Well, a lot of people now play music over compact Bluetooth speakers such as the K1, reviewed here. This particular device sounds less coloured/distorted than most small consumer systems, though, making it a good, affordable option for evaluating how mixes will sound on smaller playback systems.

Available in four colours, it's small and light enough to take anywhere, and has both a splash-proof enclosure and a carry case. It offers 8-12 hours of playing time from a full charge of its internal 2.6Ah battery. Charging can be accomplished from any USB power point, and the white power LED changes to red/green to indicate progress. When the paired Bluetooth device is turned off, the speaker turns itself off to save power.

There are some novel features, not least that the K1 sounds almost as good from the back as from the front, with only a little high-end loss. Two front-facing drivers are each powered by 5W amps, and a passive radiator helps keep the bass end tight. Kew Labs claim a 70Hz to 20kHz frequency range, though we're not told at how many dB down that figure is measured.

There's enough range to use this speaker outside your studio, to hear how mixes might sound in a different acoustic environment.

Bluetooth pairing, via a button on the top with a blue LED, is easy; my iPhone was paired and running in seconds. The range is better than for many speakers, too: Extended Bluetooth 4.2 can work at up to 66 feet, though a safe range in typical circumstances might be half that. So there's enough range to use this speaker outside your studio, to hear how mixes might sound in a different acoustic environment.

The top-panel control buttons that sit beneath the surface of the rubbery case cater for volume changes, play, pause, and muting the music, and switching to hands-free phone use (using the in–built mic). A rubber cover on the right lifts to expose the USB charging port and a TRS mini–jack aux input.

Clearly, you don't get a wide stereo image from such closely-spaced speakers, but you do get a clean, crisp sound that's very helpful in judging the overall balance of mix elements, and the restricted bass end helps to show how the low end of a mix will stand up on limited–bandwidth systems. Having heard some truly rubbish Bluetooth speakers, with horribly resonant bass, I was very pleasantly surprised by the K1, and can see it getting regular use in the studio for secondary mix checking.