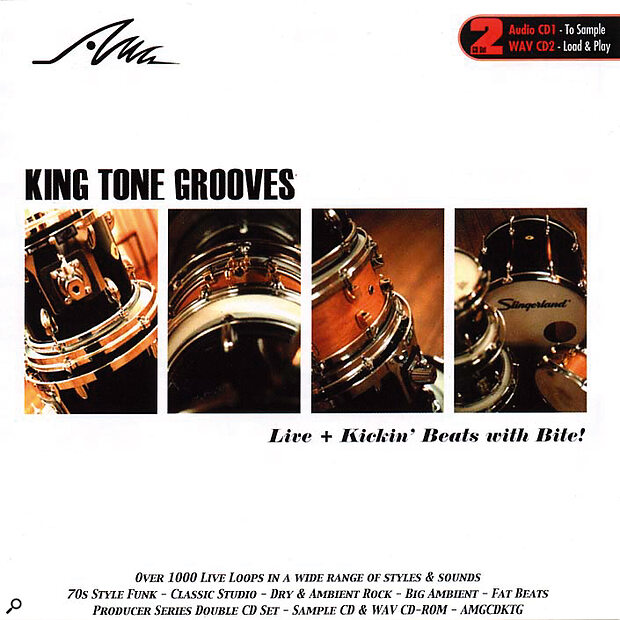 King Tone Grooves is a two‑disc set with the same set of files on one disc as CD audio and on the other as WAV files, the latter pre‑trimmed so that they loop perfectly. All the samples are based upon an unaccompanied Slingerland acoustic drum kit, played in the studio by session drummer Wayne Proctor.

The collection comprises mainly rhythmic loops subdivided into 'Fat Sounding Beats', 'Seventies‑Style Funk', 'Big Ambient Sounds' and 'Rock Loops', many with sympathetic fills. There are also 20 or so tracks purely of fills. Tempos are included on the sleeve notes.

Tonally, the drums are quite live sounding — in many cases a little more live than I'd normally use — but without any obvious reverb, so I'd guess they were recorded in a fairly modestly sized live drum room. In particular, some of the metal snare sounds ring extravagantly, and I'd have welcomed more damping. However, the result leaves you in no doubt that you're listening to real drums. The quality of playing is good, with plenty of feel and precise timing, and if you set aside the sometimes rather 'zonky' snare drum, sound quality is good.

To be honest, I'd find it hard to use some of these rhythms, even though most are fairly straight ahead — many of them sound like the kind of thing drummers play when they're warming up but never quite manage to fit into a song. Nevertheless, there's such a huge collection of rhythms that even if you can only use 10 percent of them, the set would still be a valid purchase. My colleague Dave Lockwood pointed out that it would have been useful to have separate hi‑hat and ride cymbal parts, because kick and snare can often be programmed effectively with a drum machine or single‑hit sample set — it's the hi‑hat and ride that let down most programmed drum parts.

As the samples are in WAV format, they're easy to use in any modern sequencer without having to tie up a sampler, and for convenience they're arranged into folders according to tempo. Using Logic Audio (which I did for these tests), you can drag the WAV files directly from the CD window into the Audio window, and from there into your song's Arrange window. Looping the files for playback in the Audio window confirmed that the loop points are well chosen.

For those interested in funk rock or fairly straight pop grooves, this sample collection could prove quite useful, though it isn't as flexible as some of the Groove Control or REX file libraries I've heard. Ultimately, though, if you rely on sampled drums you can never have too many in your collection, and these certainly have their uses.

Conditions are attached to the use of the samples, the main one being that a licence form (on the data CD) must be completed for commercial releases using the samples, and accompanied by a copy of the purchase receipt for the product. AMG also require a non‑specific credit on the album and a copy of the album in question within 12 months of release. They claim this is necessary to prevent the unauthorised use of pirated samples. Paul White

From DX to MODX with Manny Fernandez | Podcast
4 days 12 hours ago.