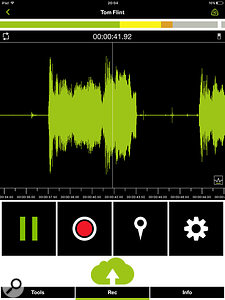 After five years of manufacturing microphones, Lewitt have developed a recording app for iOS devices. The product is designed to make it easy for iPhone and iPad owners to make high-quality recordings, either using the mic built into their device, or one that is connected to the Lightning socket. On the face of it, the app is free, but the ability to export recorded audio to destinations such as Soundcloud, iTunes File Sharing and via email is disabled until the user purchases the Pro Package version, or connects a Lewitt microphone to the iOS device. Clearly this is a significant limitation, so realistically the Pro Package price is what most will be paying.

The app’s opening page is built around a side-scrolling menu of recording icons, which grows with every new song creation. At the foot of the page there are buttons for creating a new recording, importing a file and selecting an existing recording. Alternatively, tapping on one of the icons opens that particular song’s audio display where there are transport, record and file-sharing controls, as well as a settings panel where things like the metering type, peak-hold time, pre-count length and recording mode are decided. The mode settings determine whether audio is added to the end of a previous recording, written over what’s already there, or mixed with the existing audio, but multitracking is not an option. 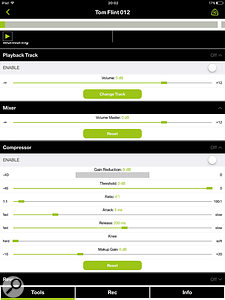 When a new recording is made, the user is give the chance to alter the word length and sample frequency. The word length can be 16- or 32-bit, but not 24, which seems a bit strange. The default sampling frequency is 44.1KHz, but the 48KHz option will be useful to those who are recording sound for picture. Apparently the app is capable of 96KHz too, but the option was greyed out on my iPad. By default the app is set up to use the on-board mono mic, but if a stereo mic is attached the stereo record option immediately activates.

Whether it’s making a new recording or modifying an existing one, the app shows what’s going on very clearly by way of a large, expandable waveform display with its own marker system and time ruler. It all works very nicely and makes recording a simple process.

After a recording has been created, a little bit of production can be done using the processors found on the Tools page. Here there is a very simple mixer, a reasonably detailed compressor, and a straightforward reverb, but all settings are applied to the recorded file rather than the input signal.

Elsewhere within the app there is a page called My Recordings, which is a kind of database with sorting, searching and filter tools. These search facilities, together with a field for setting up a naming convention at the start of the session, could be very useful for sound-for-picture recording jobs where a lot of audio files need to be collated at the end of the day. The quality of the app’s recordings depends on the iOS hardware and attached mic, so it can’t be judged in that department, but it certainly succeeds at being a simple-to-use recording tool, and its song organising facilities are a definite plus point. For many straightforward recording jobs, this app will be all that’s required.

Free or £3.99 for the Pro Package with an unrestricted feature set.

Free or $4.99 for the Pro Package with an unrestricted feature set.