Can Sicilian manufacturers MC AudioLab bring a touch of Mediterranean magic to your recordings with their new boutique preamp?

For a budding manufacturer, high‑end valve‑based audio equipment is an attractive field to enter. There's really nothing new design‑wise, and circuit diagrams for just about anything vintage, rare and desirable are readily available on the internet. Furthermore, many of the best or most fashionable valve‑based mics, preamps, EQs and dynamics processors have developed semi‑legendary status and are priced accordingly. As a result, an entire industry has grown up offering clones, reproductions, recreations and the occasional new design of these classes of products. Compared to the glory days of yore, though, the basic components, and even the valves themselves have undergone major changes (including discontinuation) and this is perhaps the biggest hurdle to overcome, with the successful optimisation of designs for use with currently available components being key to aural and operational success.

MC AudioLab believe that their combination of careful component selection, hand‑assembly, rigorous testing processes, state‑of‑the‑art technology and simple, elegant signal paths have given their products a distinctive sonic character, and an exceptional versatility for a wide range of audio applications, in both recording and mixing. The latest product that sets out to prove this point is their TP1tp 'valve‑powered' mic preamp, which has been designed to be reminiscent of vintage 1950s and '60s units, and which features a valve‑rectified power supply. The single‑ended, Class‑A circuit topology is based around Lundahl transformers and a valve duo of 12AX7 and 6DJ8/6922 triodes. 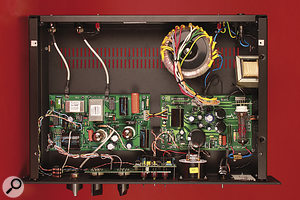 A peek inside the case reveals a high standard of hand‑built construction.

MC AudioLab units are typically black, 2U, 19‑inch rack units and the TP1tp is no exception. The white‑lettered legends are in an artisanal font that reinforces the hand‑built approach to construction and an even more quirkily‑lettered, blue backlit display that carries the model's designation sits next to the company logo.

Being only a mic preamp, with no additional processors, its front panel is lightly populated. On its extreme left, the TP1tp carries an unbalanced, high‑impedance, quarter‑inch jack input, next to which sits the output level control. Next you'll find the rotary Hi‑Z/Mic selector switch, and a 12‑position stepped gain control. Three switches controlling the rear‑panel XLR input pad and output XLR phase reverse, plus 48V phantom power, precede the rather unusual metering setup. A 'traffic light' trio of green, orange and red LEDs indicates signal levels of ‑15dB, +4dB and +15dB at the output, while the reassuringly vintage VU meter gives a continuous view of the situation, with 0VU representing +4dB at the output. Between the VU meter and the blue‑backlit display is the power on/off switch.

Removing the lid reveals the TP1tp's internal simplicity. The electronics are set out on three large PCBs, the first carrying front-panel controls and the meter drive-circuit daughterboard, the second being the valve‑rectified power supply and the third containing all the preamplifier circuitry. A large toroidal power transformer supplies the necessary voltages. The PCBs themselves are of high quality, and the tracking is nicely chunky, in order to cope with the requirements of valve‑based circuitry. If you habitually move equipment from country to country, you might want to note that there is no voltage selector in the TP1tp, so if you move from, say, Europe to the USA, it will have to be taken to a technician to have its voltage reset.

Power-supply rectification is courtesy of an Electro-Harmonix EZ81 valve, mounted horizontally above the power-supply PCB in a high‑quality valve base that grips it securely. The MC AudioLab web site carries an article setting out the case for using a valve‑rectified power supply, which is that a rectifier valve, unlike a modern solid‑state diode rectifier, does not generate any harmonic components in the audio spectrum in its output and therefore does not add anything to the audio signal.

The preamplifier PCB carries all the audio circuitry (the front‑panel PCB, excluding the meter-driver daughterboard, is simply a support for the switches and controls), and both the PCB and its components look to be of a uniformly high quality. Switching functions in the audio path (with the exception of gain) are actually carried out by relays located on the preamplifier PCB.

As I mentioned earlier, there is little new when it comes to valve circuit designs, and the TP1tp certainly shows its influences, with the 12AX7 and 6DJ8 triode combination being a neat twist on its obvious ancestry. Anyone who has owned a valve guitar amplifier will be familiar with the 12AX7 triode, but the 6DJ8 is a somewhat lesser‑known beast. It was originally designed for use as a low‑noise amplifier in VHF and UHF television circuitry, but its low distortion, high current output and high transconductance made it popular in hi‑fi audio applications. Since the 12AX7, like the EZ81 rectifier, is branded Electro-Harmonix, it's no surprise to find that the second preamp valve also carries that brand — but it is labelled as a 6922, the higher‑rated industrial variant of the 6DJ8.

The TP1tp has obviously been designed with great care and technical skill in circuitry, PCB layout and component selection. The extension of this care and skill is seen in the fact that it is entirely hand‑assembled down to component level — a rarity in this day and age.

The rear panel. What more can we say!

Like all valve equipment, the TP1tp needs time to warm up to reach its optimal operational equilibrium, so I powered it up, made a cup of tea and sat down with the short manual, which can be downloaded from the support section of MC AudioLab's web site (www.mcaudiolab.com).

If you don't read the manual and just power up the TP1tp willy‑nilly, you're in for a surprise, as the manual reveals that changing the position of a front‑panel switch can produce a pretty resounding transient — so, unless you intend to turn down the level coming from the TP1tp at some other point in your signal path, remember to turn its output control down before you start changing settings. The biggest offender is the Gain switch, but even the output level control, acting as a master volume, gives out a bit of a crackle when operated, so it's best to do any necessary level changes elsewhere in the recording chain. These artifacts are not faults. Rather, they're the trade‑off that has had to be made to obtain the quality of sound of which the TP1tp is capable.

As on an electric guitar amplifier, you can use the combination of gain and master volume to control the amount of valve‑induced harmonic distortion in the sound from the TP1tp. However, given the need to rebalance the output level when changing gain, I'd have liked to see physical detents on the output control, so that you could repeatably get back to an output level, since chinagraph pencils are a lot less common these days than they used to be!

The combination of VU meter and LEDs worked very well in practice, and I always knew where the output levels were. It felt slightly weird not being able to see input levels, but with this unit you're 'input metering' with your ears as you juggle the metered output level with the gain and output level controls, in order to obtain the desired amount of distortion.

One extremely useful feature, often overlooked, is the presence of the two separate earth lifts, which were godsends in my setup, enabling me to completely overcome earth loops between the TP1tp and other equipment.

Overall, the TP1tp does exactly what it sets out to do: it's a very fine microphone preamplifier based on all‑valve technology, which provides warmth and adds rich harmonic emphasis to fatten tracks. Its noise floor was also amazingly low — once I'd switched out the earth loops.

Used in its 'clean' mode, with the output level wound up and the gain in the lower reaches, the TP1tp sounds just like an old valve hi‑fi — clean and precise but with a sheen and warmth that adds a certain something to the sound — and I got some very fine results from vocals and a variety of acoustic instruments recorded through it.

Modern solid‑state, large‑diaphragm condensers can sometimes be accused of sounding a bit too precise and clinical, but the gloss in the sound of the TP1tp helps compensate for any tendency in that direction. Dynamic mics also benefit from this sonic coloration, and give another set of sound palettes to choose from, especially as the preamp goes into higher levels of gain.

Increasing the gain and reducing the output level certainly fattens up and adds weight to a modern condenser mic like my AKG C414, just as the designers of the TP1tp intended. However, I also found that dynamic mics came into their own on vocals once I got into running the TP1tp at its higher gain settings, giving a sound that would work well in a rock context.

Miking up an electric guitar cabinet with a dynamic mic run through the TP1tp gave very usable results, as changing the gain settings allowed me to easily change the character of the sound. It's hard to describe this, but if you've ever longed for a control marked 'attitude' on a guitar amp, I think I've found where it lives.

Plugging a variety of guitars into the TP1tp's jack input was another interesting experience. Don't expect a Boogie front end to be lurking inside this box, as all the distortion is happening essentially inside one preamp valve, but solid‑body electric guitars and basses plugged straight in sounded very good at low gain levels. Crank the gain and chords won't sound all that great, but single‑note lines really benefit from the 'fattening effect' and there are some interesting textures to be found. Feeding the TP1tp at lower gain settings with the output of a double bass, or an acoustic or jazz hollow‑body guitar with piezo or 'acoustic' magnetic pickups, gave very attractive results.

The MC AudioLab TP1tp is a splendid piece of hardware. It has an individual sound character that offers an attractive alternative to its modern, solid‑state equivalents — although, not having any of the more common bells and whistles, it is of course a bit of a one‑trick pony. If, like me, you're into a bit of valve harmonic distortion in your sound and the TP1 delivers what you want to hear, you're going to love it.

Price‑wise and feature‑wise, the TP1tp faces a lot of competition from other valve‑based mic preamps, most of which have more features and facilities and carry significantly lower price tags. Given the depth and range of that competition, the TP1tp is going to have to seek out engineers and producers who will value its sound over its price tag. Having said all that, I enjoyed working with the TP1tp and I think a lot of other people would too. It's well worth tracking one down and auditioning it on a variety of sources. You just might find the sound you've been looking for.

There are not too many direct competitors, but among those you'd probably want to have a look at are Universal Audio's LA610 MkII, the Avalon M5 Mono, and the TAB Funkenwork V72M, a minimalistic Siemens V72S‑based device due out shortly after we go to press, and which should be around the TP1tp's price point.

The TP1tp has all the typical warmth, sheen and character that you'd expect to find in a valve preamp, and it not only produces great results with condenser and dynamic microphones, but also works extremely well as a preamp/DI for guitars and basses. It faces strong competition, but it should be high on the audition list of an engineer or producer looking for 'that' valve‑preamp sound.