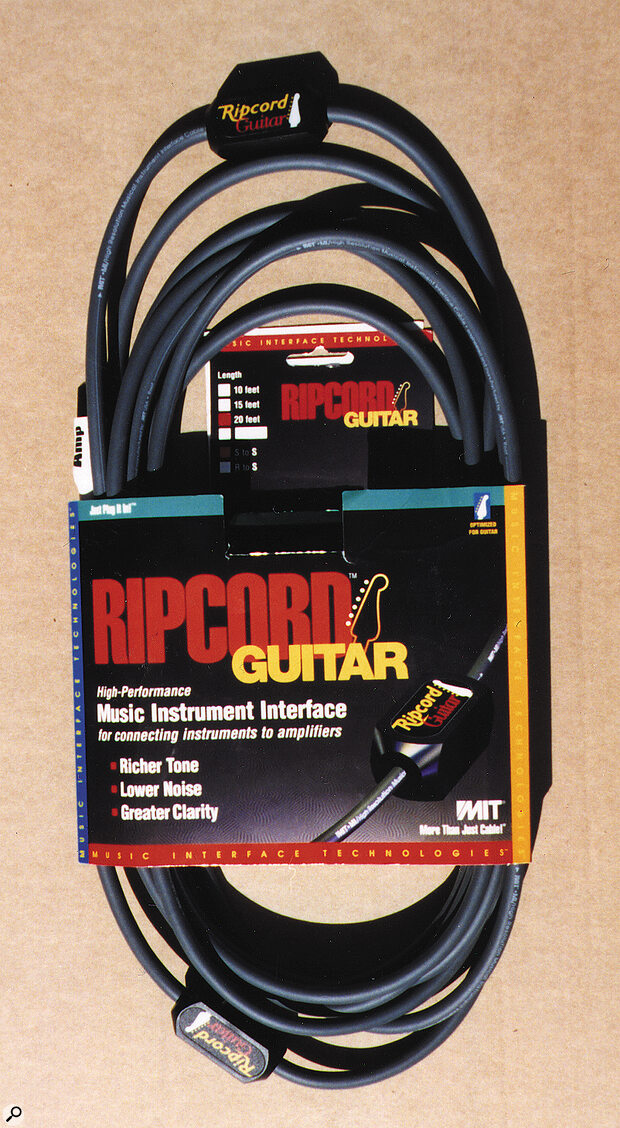 If you've ever read a hi‑fi magazine, you'll have seen advertisements for cables that cost more than the gear they are connected to, which make extravagant claims about performance improvement. The Ripcord guitar cable doesn't (quite) cost as much as most guitars, but its makers certainly make extravagant claims for it. Those who've researched the subject, however, know that guitar cables do make a difference, as the cable capacitance forms a tuned circuit with the inductance of the pickups, adding a coloration to the sound. If you put a DI box at the guitar end of the cable, you lose this effect and the tone changes, usually for the worse. MIT, however, have done a lot more than produce a cable with the right capacitance to match the guitar; they've made a cable with a passive filter network at each end which, they claim, produces a richer tone, lower noise and greater clarity.

The passive networks are contained in small plastic 'lumps' at either end of the cable. Because each is different, the cable has to be used the right way around, so the ends are obligingly marked Amp and Guitar. Obviously the company don't tell you what's in the boxes, but there exist a number of passive, reactive components that could make a difference, including capacitors, coils and ferrite bead RF filters. Ultimately, I don't suppose it matters what's in the boxes as long as it works — so does it?

Oddly enough, the Ripcord makes more than a subtle difference, most apparent when using my Strat Plus guitar with a valve Fender Champ amplifier. With a moderately overdriven blues sound, the Ripcord seemed to reduce the gritty components of the sound in such a way that the pleasurable parts of the distortion remained while the intermodulation products and general high frequency grot were significantly reduced. The guitar also 'felt' smoother to play, a well known phenomenon when using different sounding guitar setups. The sound was audibly smoother and more even, almost like adding the mildest tube compression, with more of a ringing, singing quality to the tone.

Other tests with my Line 6 amplifier also showed a noticeable improvement, but perhaps not as great as with the Champ. Similarly, my Yamaha Pacifica guitar didn't improve as much as the Strat Plus through either amp, so it's down to trying the lead with your own gear and making up your own mind. At over £60 for the lead, the Ripcord must be considered more as a passive signal processor than as a simple connector, but the improvement it made was great enough to make me feel I have to have one. Suspend disbelief for a while and try one yourself — the difference is quite evident and very worthwhile in the studio. Paul White