When composer and instrument maker Steve Roche finishes a tin of biscuits, instead of throwing the container into the recycling bin he transforms it into a guitar. Modwheel recorded one of Steve’s four–string fretless tin guitars to create this virtual instrument, which packs 2873 24–bit, 96kHz samples into a 1.4GB library. The recordings were made both acoustically and with a pickup that was fed through a vintage Fender Twin amp with reverb, and each note has several velocity layers and at least three round robins. Everything is accessed via a series of Kontakt interfaces fitted with effects and (in some instances), an arpeggiator.

The product notes suggest that the sound is somewhere between a dobro and a banjo, which is a pretty reasonable summary, but the instrument could also be used as an alternative to a dulcimer or a qanun. 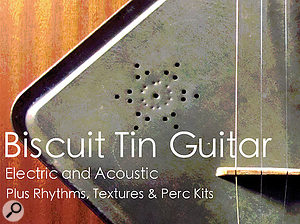 Some Kontakt interface designers provide a single multi–purpose interface, but Modwheel’s approach is different. Biscuit Tin Guitar has 10 acoustic, 14 electric, seven percussive and four synth instrument interfaces. Three of the synth instruments have Harringtin 1200 in their names, which is a jokey reference to the EMS VCS3, whereas the Rin Tin Tin Arp 2000.NKI is a little more self explanatory. All four are remarkably synth–like considering their origins.

They also all have an arpeggiator that uses a two–to–32–step sequencer as its engine and provides control over things like note order, pitch and timing. Effects includes an amplifier, rotary speaker simulator, echo and phaser, all of which sound great and can be tweaked from a dedicated effects page. The main page simply has a switch for turning on the arpeggiator, a reverb return knob labelled Stretch and a guitar cabinet on–off switch.

Both the acoustic and electric instruments can be switched between hand- and plectrum-picked samples, and both have a set of keyswitches that make it possible to trigger realistic articulations from the keyboard, the options being Long, Short, Mute, Slide up and Hammer off.

One group of keys (pink) sets the master articulation, but if a green key is pressed or held one of the other articulations will play. It takes a bit of practice to use them in any meaningful way, though. Some patches make use of the mod wheel to control certain effects parameters, and there are even keys within interfaces that trigger finger-picking loops.

Only the percussion interfaces lack the effects parameters page, but they do have keyswitches, basic echo and reverb controls, and the same arpeggiator tools as the synths.

Over the years I’ve encountered quite a few novelty Kontakt libraries, but despite its slightly comical name, Biscuit Tin Guitar is a seriously versatile instrument offering a range of sounds that goes far beyond what one would expect from something with such humble beginnings. The percussive sounds are interesting and fairly original and the synth ones, particularly when arpeggiated, are very playable.

As for the electric and acoustic instruments, they sound very nice indeed and offer a lot of options ranging from clean and polite to overdriven and dirty. All in all, Biscuit Tin Guitar is a great product with a relatively low asking price. Tom Flint