Elastic Drums is a 16–step sequencer and drum/percussion synthesizer with six audio channels and four effects, plus some automatable effect–modulation controls that make good use of touch–screen technology. It is the brain child of Oliver Greschke, in collaboration with German IDM duo Mouse On Mars. Oliver’s intention was to create a tool that was easy to use and fun, and his work was inspired by Korg’s Electribe and the various Machine products from Elektron. 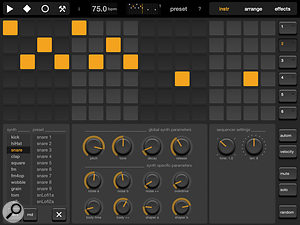 Elastic Drums’ Sequencer page, where the sound editing and sequencing of drum parts takes places.MOM Instruments warn that the app is CPU-hungry, and the effects will switch off to maximise resources on iPhone 4 and iPad 1 devices. I used an ageing iPad 2 and iOS 8.3 for the review and had no such problems, although I ran into one or two minor bugs.

At the top of the app is a menu bar which remains the same no matter which page is being viewed, thereby making it easy to access the main functions at all times. On left of the bar there are the transport and record buttons, and an audio and MIDI settings page where thing like the audio buffer size and MIDI sync setting are decided. Next along the menu bar are tempo and pattern counters, the values of which can be changed with a finger sweep. In the middle is a button that brings up a long list of arrangement presets, and on the right there are three buttons which call up the main windows/pages.

Instr is the first of the three windows, and also the first that the user sees when the app is opened. It’s here where the individual patterns are created and edited via a step sequencing method that’s been used on hardware products from the likes of Roland and Zoom for donkey’s years. Notes and beats appear as orange blocks on a grid, and can be removed or added with a simple tap of the finger. The grid shows all six audio channels, and when one is selected, the sound it is playing is shown underneath, along with its own set of parameter controls.

Any of the six sounds can be swapped for another, and to make it easy for the user to find the combination they’re looking for, the menu options are split into 10 instrument types (Kick, Snare, Hi–hat, Clap, Square, FM, FM4op, Wobble, Grain and Tom).

Arranging the patterns into a song happens on the page called Arrange, where there are 20 pattern slots. Patterns can be copied from one slot to another and then modified (which is a pretty fast way to build a song), or made the hard way by picking a vacant pattern slot and programming it from scratch. 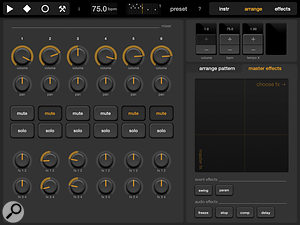 Elastic Drums’ Arrange page, which is also where we find the instrument’s mixer.Taking up most of the page is the mixer through which the six channels are balanced. Each channel has volume, pan and effects send knobs, plus mute and solo buttons. It would perhaps make more sense to have the channel mixer controls on the Instr page, but Oliver has had to fit things where he could find space.

Touchscreen technology is used most effectively on the Effects page, which has an X–Y matrix for modulating parameters of the 11 mono and nine stereo effects. The movement of a finger on the pane is automatically recorded when a pattern or sequence is playing, and each effect can be modulated separately. Given that you can automate knob adjustments, some pretty radical audio manipulation is possible.

Additionally, the stereo mix bus passes through a group of well–chosen ‘master’ effects and processors (Freeze, Stop, Comp, Delay, Swing and Param), but their X–Y panel is back on the Arrange page.

Overall, Elastic Drums is a curious mix of old step-sequencer features and newer, touchscreen–controlled sound-manipulation tools. It reminds me of Pulse Code’s Rhythm Studio app, which emulates a bunch of old sequencers and combines them with an X–Y controller, but Oliver has definitely found his own way of doing things, and has created an instrument with its own distinct character.

Most of the functions are fairly intuitive, and nothing is further than a button tap from the screen. Consequently the app is pretty easy to use, although the X–Y controllers offer so many possibilities that time is needed to explore them fully. Audiobus and Inter–App Audio support means that Elastic Drums can be used with other apps, and it’s possible to record a performance (as a WAV) and export it to Soundcloud, Audioshare or simply to email it to someone.

I can imagine some users composing rhythm parts during long bus or train journeys, and others integrating it into live performances. For the modest asking price, it’s most definitely worth a look.

What Do Mastering Engineers Actually Do?
1 day 11 hours ago.