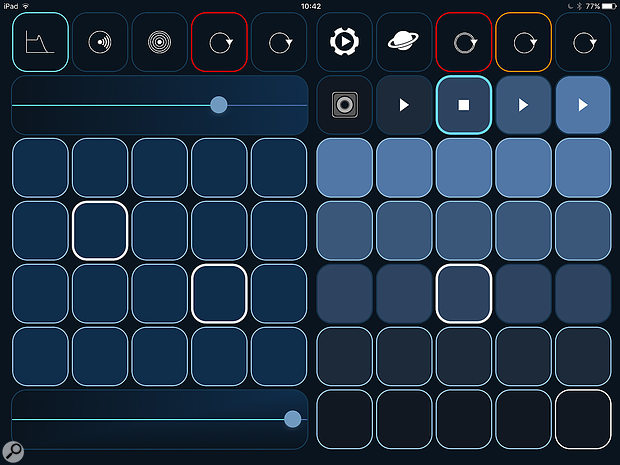 This app requires iOS 9.3 or later, and I’m afraid my first reaction was to grumble about Apple nabbing more of my precious storage! Obviously, it’s vital not to dwell on such things but if you do happen to be feeling down, Moodscaper (the reason for the update) is a soothing lotion for life’s trials. Part instrument, part interactive ambience, part subtly-changing New Age album, Moodscape’s Autoplay button is a wonderful introduction to its charms. With a single touch, it generates a musical artwork that’s different every time.

Impressed by the warm, orchestral string-like sounds with gentle attacks and long releases, I asked creator Rob Jackson about their origins. “The patches are 100 percent custom timbres... I wanted the sounds to be unique so spent something like three weeks micro-sampling my guitar... fuzzed, flanged, scratched and scraped — you name it. Those waveforms then went into Animoog’s tables, with icing on the cake in the form of sample processing from Borderlands Granular.”

Some of these samples are fairly long, and since there are up to six prepared for each note, the round-robin voice allocation contributes tasteful variations of its own.

Autoplay’s generative output is built on unseen rules of form and structure but at the most obvious level it’s influenced by the adjacent Mood icon. Three moods are offered — Light, Dark and Space — and as you switch between them you notice that the samples change too, eg. Space’s string tones become more synthetic. You can flip moods during Autoplay or engage the random mood setting and leave it pootling away in the background while you attempt a full lotus, or a half lager.

There’s much more to Moodscaper than automated playback. You can join in with the performance or turn it off entirely and trigger the notes yourself. There’s a different scale for each mood, each scale comprising just five notes. The 5x5 matrix of pads is arranged with the highest pitches at the top and the sustained and majestic bass at the bottom. Chords (positioned immediately above the bass) are served from a selection chosen to partner the root note, and some are primed with notes beyond the current scale, adding a dash of musical sophistication.

Generally, when a chord is triggered, the bass plays too (although this behaviour can be deactivated). You can also latch any bass note or chord by simply touching the pad then dragging it sideways. Having done this to initiate an atmospheric drone, I opted for a Dark mood and began triggering notes. Dark corresponds to the Japanese Insen scale (EFABD), and within minutes the combination of sweet sounds and soft envelopes had me hooked. However, the real magic begins when you engage voice automation and looping.

There are four voice automation keys corresponding to the bass, chord, middle and treble sections. Hit play on each and the corresponding row is deselected for regular playback. Moodscaper now waits for you to trigger a bass or chord before choosing a note (or notes) on your behalf, or maybe leaving a rest. In contrast, the loopers are simple gesture recorders (rather than audio loopers), but they’re quite versatile given there’s no practical limit imposed on loop length. One is slightly different to the rest — its dual ring identifies it as the primary looper. Ordinarily, the length of each loop is unique, but if you do wish to impose some structure, all it takes is a simple gesture and either of the other loops are set to equal the primary. Otherwise, all behave as expected and you can return to them at any time to add overdubs or clear events with a snappy double-click. Perhaps the only feature missing is the ability to pause a loop’s playback without wiping it. Voice automation works neatly in conjunction with the loopers, adding elements of generative music already experienced with Autoplay.

If you’re an iPhone user, that wraps it up, but the iPad has several cool extras in the form of a second set of pads, two more loopers, and effects (a low-pass filter, delay and reverb). Each effect has a single slider which adjusts multiple parameters under the covers: eg. the delay slider adjusts the decay time, a low-pass filter cutoff frequency and the wet/dry mix. Naturally you can apply typical filter sweeps to Moodscaper’s output, but any looper will capture the movement too, along with note triggering on either set of pads. The lower slider is a pre-effect volume control and also eligible for automation.

The left-side pads are populated with different samples — a fine collection in the ‘big and atmospheric’ category. Switch mood and they switch accordingly: eg. the Dark mood gains resonant synth sweeps while Space introduces shifting soundscapes and whooshes. And in another treat for drone lovers, up to five of these can be latched simultaneously.

Last but not least, you can import samples to play alongside those present. Well, after a bit of preparation anyway. The samples must be carefully named according to the mood or moods they’re to appear in. Each should also be prefixed by the desired pad number before being copied in using iTunes. As the samples are loaded into RAM, it’s advisable not to make them too large, but I found 20-30 seconds presented no problem to my iPad Air. The biggest drawback could be the requirement that they are converted to Apple’s CAF format. Luckily Logic did that for me, but I’m assured that other formats and more sophisticated methods of importing samples are planned, along with satisfying my other burning desire: more scales please!

Moodscaper is an attractive-looking, undemanding app with a single screen and no menus. It’s ideal to dip into if you have a spare five minutes, although you might find that time has no meaning once those soporific sustained notes start drifting by. In the right context it can be a worthy and lush-sounding musical companion boosted by complementary original samples. Or, if you’re wound up by the daily commute but can’t lay your hands on an Eno album, its generative output provides a wonderfully calming background ambience.