Another decade in this classic series

The Native Instruments Abbey Road Drummer series must be close to completion. Previously we have had Vintage, 60s, 70s, 80s, 90s and Modern Drummer, and now NI have slipped 50s Drummer into the decade-sized gap between Vintage and 60s. 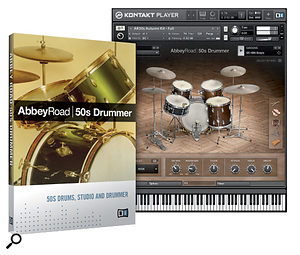 Its format is very much the same as that of the others in the series. There are two memory-hungry instruments based on composite vintage kits, plus 'lite' versions of each. The library comprises a huge number of samples that have been scripted so that the user just triggers the kits in Kontakt and the software gets on with managing the multisamples and round-robin variations that help the kits sound less like samples.

Both kits were recorded in Studio 2, which is known as being rather dry-sounding for a big space. Even so, extra absorbers were used, apparently to mimic the tighter recording environments of the 1950s. This explanation doesn't quite make sense given that Cliff Richard's classic 'Move It' was recorded in Studio 2, but I suspect the producers were trying to capture more of a generic '50s vibe than the sound of that particular space.

To distinguish the two kits from one another, the early '50s example is called Spring, whereas the one dating from the latter half of the decade is labelled Autumn.

Of the two, the Spring kit — a Gretsch Cadillac Green Nitron model — generally has less lower-mid warmth. Its snares bite harder, but the bass drum is not as tight. The Autumn kit's sounds are more rounded, although the NI team tuned its toms to achieve a slightly brighter tone. On both kits the cymbals are very kind on the ears, sounding a little fuller than those of NI's Vintage Drummer.

As with previous NI Drummer products, all of the snare samples can be changed together by switching between three snare options, and the editing parameters of each cymbal or drum instantly appear in a control panel when the user clicks on their image.

The Kontakt interface includes a virtual mixing studio that allows a great deal of sound shaping to be done. In the mixer window it is possible to adjust the level and pan of every microphone channel, and each of those has its own processor chain. Nevertheless, for those not keen on editing, 50s Drummer provides a style menu that has nine presets including jazz, rock & roll and blues.

In terms of options there are brushed snares, rolls, rim hits and a variety of hard and soft snare and tom strikes, all of which are spread across seven keyboard octaves and grouped by kind. Add to that some extra percussive options like sandpaper, cow bell, tambourine, hand claps, sticks, triangle and woodblock, and you have a very impressive and flexible virtual instrument.

Obviously, the emergence of rock & roll is one of the most notable musical events of the 1950s, but jazz, classical, swing and film music were also all going strong throughout the decade. This instrument does a good job of summing up the drums of that era and, incidentally, it sounds extremely good too! Tom Flint