Noire is the result of composer and pianist Nils Frahm's quest to recreate his signature piano sound as a virtual instrument. Produced in collaboration with Galaxy Instruments, the piano in question is a Yamaha 9–foot CFX Concert Grand, hand-picked by Frahm and customised to achieve his ideal tone. Frahm and the team also rose to the challenge of conceiving a unique feature for Noire designed to inspire creativity and lift it above the crowd. Sampling took place in the piano's 'native habitat' — Saal 3 in Berlin's renowned Bauhaus-designed Funkhaus recording complex, using vintage mics and preamps. 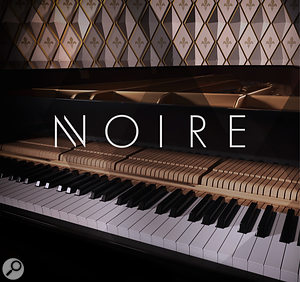 Noire comprises two distinct incarnations of the same piano as two NKI instruments; Noire Pure and Noire Felt. The Pure version, as its name suggests, was sampled au naturel, whilst the Felt version has a layer of felt placed between the hammers and strings, producing a soft, intimate sound. The current popularity of this 'felted' technique is clear from the growing number of similarly themed products — Fractured Sounds' Midnight Grand and Woodchester Piano libraries being two such examples.

Both versions of Noire share identical features; their unique attribute is something called the Particles Engine, discussed later. In its guise as a 'normal' sampled piano, Noire provides highly detailed control over every aspect of the sound, including one or two I've not encountered before in a virtual piano. The main page offers five controls: Dynamics (volume response to velocity), Reverb amount and Delay amount. Color and Tonal Shift transform the tonal character in drastic ways; according to the manual, Color adjusts the sample mapping, while Tonal Shift alters the playback speed and formant frequency. The possible combinations of these two controls are numerous, with tonal extremes ranging from 20 fathoms underwater to demented harpsichord. It's interesting to note that setting Noire Pure's Color control to around -60 renders a thoroughly convincing Felt piano. I actually prefer its richness of tone compared to the 'real' Noire Felt instrument, but as with wine, cars and movies, it's all a question of personal taste.

Turning to the Piano edit page, things get seriously detailed. In the Anatomy section we find volume controls for release samples, body resonance and overtones (sympathetic string resonance); the release samples and overtones can be optionally on or off, whilst a single Attack slider acts as the only envelope control, easing the sound in up to a maximum of two seconds. In the Noises section, Pedal, Mechanical and Felt noises are all optional, with volume controls for each. Pedal noises are further fine-tuned via a drop-down menu offering individual balance controls for rumble, damper and string noises. Similarly, the Mechanical Note On and Note Off noises can be balanced against each other; the low end of these can be quite intrusive if their level is set high, so a dedicated low-pass filter is provided to roll off the offending frequencies.

The Tone section includes three unusual yet useful features: Low Keys progressively adjusts the volume bias of keys below C3 positively or negatively; Sub adds further low–end enhancement courtesy of an optional set of sub–bass samples (with adjustable split point) recorded using a reverse-wired NS10 speaker beneath the lowest keys. The most captivating of these, for me, is the Tonal Depth control; when engaged, it activates additional resonance that makes the piano bloom with rich body and presence, increasing the perceived sustain time. Once heard, you may not want to turn it off. The Settings section handles options for velocity response curve, re–pedalling, half-pedalling, stretch tuning and master tuning.

After delving in and exploring the abundance of tonal adjustments and customisable details, the piano truly came to life, and the hours simply melted away.

The FX page hosts a three-band EQ, each band having three preset choices of frequency described with names such as Shimmer, Bite and Punch. Effects also present are Transient, Stereo Width and a Compressor with 17 presets. The Style effect offers a selection of insert effects chain presets in three flavours: Timbre (eg. toy speaker, distortion, radio sets, old mics); Moving (eg. filter modulation, auto panning); and Continuous (convolution–based otherworldly sustaining textures). If you like a bit of background noise, 32 types are available, from rooms and halls to vinyl and even a rainy Sunday. Don't forget the pianist — you can add his/her grunts, creaks and breathing noises too. A choice of convolution or algorithmic reverb and Kontakt's new Replica XT delay top things off with a heady mix of spacial effects.

And then there's the Particles Engine. In the manual's words, it "adds motion to your playing by automatically generating clouds of pulsating, swirling harmonic elements created from piano tones, plucked piano strings, mallets or brush hit samples". It's not a delay or an arpeggiator, but a set of 17 preset algorithms that generate MIDI notes according to each algorithm's rules, based on what you play. As well as the four types of tonal samples triggered by the Engine, there are four types of mechanical attack noise; a fader adjusts the volume balance between these. Controls for Density and Variation govern the frequency with which notes are generated and the patterns they form. When tempo sync'ed they create a rhythmic backdrop, and when running in free time they create aleatoric, random clouds — always harmonically in keeping with your playing, but never seeming to repeat the same pattern. Beyond that it's almost impossible to describe in words, other than to say that it becomes quite addictive.

So what about the core piano sound of Noire? The basic Pure instrument is somewhat dry, having an intimate if slightly restrained character. Tuning is well-nigh perfect, with commendable consistency of timbre and dynamics across the entire key range. Exploring the Grand Piano snapshots reveals its wide-ranging dynamic and tonal potential, although I felt the Particles snapshots could have been rather more adventurous and demonstrative. After delving in and exploring the abundance of tonal adjustments and customisable details, the piano truly came to life, and the hours simply melted away. The Particles Engine is particularly absorbing, adding that elusive unique character and a strange beauty that elevates Noire above the ordinary.