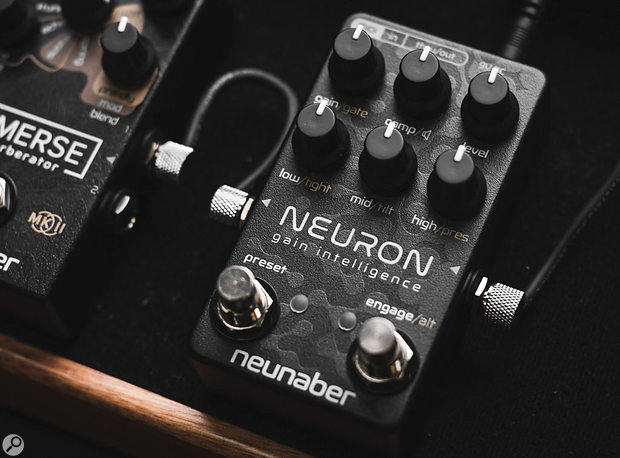 Neunaber's Neuron marks an interesting departure from the reverbs and delays for which they're best known — it offers digital amp and cab emulation in one of their standard-sized pedal cases, and is controlled by just six knobs. The pedal aims to emulate a range of amp tones, from clean to heavily distorted, using what Neunaber describe as a 'multi–stage, dynamic gain architecture', and one of their key design objectives was to replicate the playing feel of a real amp.

The Neuron, which runs off a standard 9V/100mA power supply (not included), has two footswitches, one of which is used to save/recall presets and the other caters for Bypass and Alt functions. Five of the six controls have dual functions, accessed by holding down the right-most footswitch in the manner of a Shift key: Gain/Gate, Comp/Speaker, Level, Low/Tight, Mid/Tilt and High/Presence. The Tilt EQ provides tonal shaping to match the sound to different venues or amps without disturbing your main settings, and is applied globally. The ins and outs are mono, on standard jacks, but rear-panel mini TRS jacks provide MIDI out/thru and MIDI in, and a pair of 5-pin DIN to mini-jack cables is included.

To shape the guitar sound there's a single-knob compressor, a noise gate to clean up high-gain sounds, and a switchable (on/off) speaker simulator, which again is applied globally — so you can run the pedal into a PA or recording system with speaker simulation, or a guitar amp without. The three-band EQ allows low-end Tightness and Presence adjustments separately from the Tilt EQ, and the controls have a usefully wide range. Unusually for such a straightforward-looking stompbox, presets can be saved. By default only one can be stored, and with the Preset switch off the manual control positions prevail, but via a simple power-up routine you can set up a maximum of six, each with its own LED colour. Saving a preset involves stepping through to the appropriate slot, tweaking the controls and then pressing and holding the Preset footswitch.

The MIDI capability adds even more flexibility. Program Change messages may be used to select presets directly (increasing the maximum number of presets to 24), while all user parameters can be accessed using MIDI Continuous Controller messages. SysEx dumps are also supported.

With the 96kHz sampling engine, the overdrive sounds avoid suffering from any audible aliasing, and that gain knob has a huge range that goes from perfectly clean, via a subtle bluesy crunch, right the way to full-on rock with heavy drive tones. The compressor also works well but can sound a bit fierce if taken past its mid-way position (especially if your guitar has powerful pickups), imparting an obvious 'quack attack' to the sound.

The overall playing 'feel' seems more natural than I tend to experience from amp-modelling plug-ins. 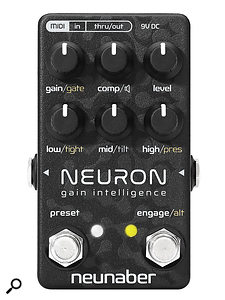 If you're after a clearly defined blues tone without a gritty edge, the secret is in how you set the tone controls and compressor, as with the addition of Tight and Presence, there are five EQ parameters to juggle, not counting Tilt. The drive is reasonably touch-responsive at modest gain settings, but again you have to be prepared to finesse the gain, tone and compressor controls to find the sweet spot, just as with an amp. At higher gain settings, the sound doesn't clean up quite so well when you back off the guitar tone control.

The overall playing 'feel' seems more natural than I've experienced from amp-modelling plug-ins. And while I've never really come across a modelling DI solution that quite captures the Pete Townshend style of aggressively ringing chords, this pedal gets closer than most — as long as you're not scared of a little treble. It sounds good, but for more tonal flexibility when recording you can always turn off the speaker emulator and use a software or hardware cab emulator. There's no reverb or tremolo on board, but again, you can add these via plug-ins or pedals; I found that a hint of reverb took away the rather dry, close-miked sound. Pedals can also provide access to different flavours of overdrive.

For live performance, the ability to cycle round a number of presets is particularly useful, and the pedal can go directly into a PA or, sans-speaker emulation, into an amp's main input or effects return. It doesn't emulate specific amp models, but I didn't miss them, as the wide control range gives you access to such a broad palette of tones, and I always felt comfortable playing through it — which is arguably just as important as the sound itself.

Some multi-amp, multi-effects modelling pedals cost not that much more, and whether the Neuron is the right device for you depends to some extent on whether you're a 'separate pedal' person or prefer everything in one box. But I love it — the Neuron is compact, versatile and sounds good, and it can perform equally well as a DAW front–end, part of a live-sound pedalboard, or a backup in case your 'real' amp explodes at a gig!