Film makers and theatrical producers are well aware of the dramatic power of ensemble drumming and percussion playing. It is used extensively during energetic movie action sequences and a recent appearance of Stomp at the 2012 Olympic closing ceremony demonstrated that it also translates onto the big stage. 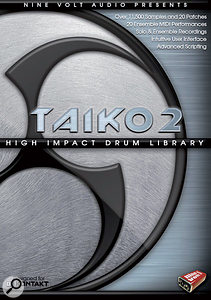 Unlike Stomp, Taiko 2 exclusively showcases Japanese drums, multisampled and programmed to function as an instrument within NI's Kontakt. Possibly the best way to get to grips with the content is to load a selection of the 20 MIDI performance files into a DAW and listen through a few times, studying the note patterns as they play. Pattern names such as Hell's Pass, Prehistoric, Palace Guards, Dragon Warlord and Dojo Fight give a fairly clear idea of what sort of scene each one is designed to evoke!

The actual sound samples appear in Kontakt as part of a series of 'instrument' files, which are categorised as Kit, Ensemble and Solo Drum. Of those, the Kit files are the largest and include drum, percussion and voice parts that are assigned to specific keyboard notes so that they can be played easily using a controller keyboard. The four Kit variations in the menu are derived from low, mid, high and close microphone positions.

The Ensemble files are simpler, each one focusing on a certain instrument type. Distinction is made between drum, rim and stick ensembles, and there are close and front-of-stage microphone versions of each. The same options are repeated for the Solo Drum instruments, which, of course, are recordings of a single performer. Together, the instrument files allow users to either tackle the whole orchestra at once, or zoom in on specific instruments, when they're all that's required.

Operating within Kontakt, Taiko 2's custom interface provides easy-to-use tools for shaping the sound of the instrument files. Equalisation is handled by low, mid and high sliders, and high- and low-pass rotary controls. A menu called EQ DNA is actually a list of convolution-type EQ presets, its response curves having been taken from various location recordings. Taiko 2's reverb is also a convolution type and has 16 presets, this time with additional wet and dry sliders for finely controlling the effect level.

Further sound adjustments can be made using a stereo width control, and by altering the level of virtual valve saturation. The other major sound-shaping tool is an attack-time slider, which is able to apply different ratios to each instrument, effectively softening solo drum, stick and rim samples to a lesser degree than the ensemble ones.

Control panel aside, the most important thing to say about Taiko 2 is that it sounds excellent, almost regardless of what notes are being struck on the keyboard. It's clear that the hard technical work has already been done by the musicians, engineers and programmers, leaving the end user with very little to worry about besides making creative decisions. Each instrument, for example, has 10 velocity ranges and 10 round-robin variations, so any one of 100 samples might play when a note is pressed. Overall, that amounts to 11,500 samples, yet the user only ever has to juggle a few parameters.

The only possible criticism might be that Taiko 2's variations are not derived from recordings of different types of drums: this is one orchestra in one location offering one underlying sound. Nevertheless, not many people have access to a room full of Japanese drums, or indeed the musicians to play them, so the library's value is obvious.

All in all, it's probably fair to say that buying Taiko 2 should be a no-brainer for anyone who is asked to produce music for action films and games on a regular basis. Tom Flint