Rhythmic Robot are a small outfit dedicated to breathing life into the strange and the obscure via the medium of Kontakt. Their instruments require the full version of Kontakt rather than the player version, and V4.2.3 or later is recommended. 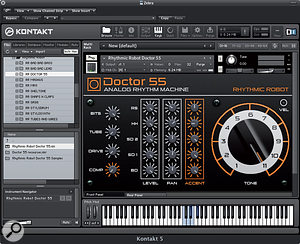 The samples behind each instrument are 24-bit mono, well balanced and natural sounding, and every parameter is just a right-click away from MIDI control. Also, since they're at 'app store' prices, it's hard not to be tempted to try one — or more than one. There are currently three main collections to sift through: Beat Room, Keyboard Vault and Laboratory. This month we start with a look at Beat Room and we'll continue our rhythmic explorations in the June issue of Sound On Sound.

Lovers of old drum machines will recognise some of this batch, but there's at least one you won't have come across. Starting with the best known, Doctor 55's samples are sourced from a Boss DR55: the first Dr Rhythm. With a kit consisting of just a kick, snare, hi-hat and rimshot, the DR55's best patterns arose through creative use of accents. Understanding this, Rhythmic Robot have sampled every percussion voice at every accent level and have also provided a 'Velocity Retrofit' button, so you can play with nuances no genuine DR55 could match.

The chink in the DR55's sonic armour was always its snare. It was just a fraction too short, at least without a spot of internal tinkering. Fortunately, Rhythmic Robot have tinkered on our behalf, and so are able to offer the original snare plus a second, boosted with variable attack and decay. With its large rotary dial delivering a selection of progressively brighter tones, the neat and recognisable UI is the perfect setting for this recreation of the oldest Dr Rhythm.

Next up is the SR88, its samples taken from a Sound Master Memory Rhythm. This was an analogue beatbox from the 1980s, its most unusual feature a basic low-pass filter acting as a master tone control. Filled with samples of each drum at every available filter setting, this simple Kontakt instrument slips into a mix as effortlessly as any Roland drum machine. With 'Velocity Retrofit' active, dynamics are routed to tone, opening doors to surprisingly subtle and expressive patterns.

As we know, analogue sounds tended to be labelled with a certain optimism, and here the SR88's 'crash' is of that ilk; it's actually a cute metallic plink. However, the kick is fat and meaty and, when tuned down low, could justify an SR88 purchase by itself. True, the snare suffers from the same affliction as the DR55 (it's a little 'premature') but, again, the Professors at RR found a way to prolong it, and to extend the duration of other voices. There are thus alternate versions of the snare and cymbal, plus two extra hi-hats, all with independent two-stage envelopes. The SR88 is a great little instrument — and a discovery for yours truly, who never owned one.

Yamaha aren't a company often associated with analogue drum boxes; their MR10 didn't exactly set the world's foot tapping and was most notable for the pads that were provided to accompany the preset rhythms. In the MR11, you get all the MR10's sounds primed to play original patterns via your DAW.

The MR11 has no global tune control like Yamaha's machine; instead, each voice has been sampled at different tunings. I was pleasantly surprised by how the MR11's kick and snares cut through; they're way better than my (admittedly foggy) memory suggested. Only the toms still fail to move me — they're naff and cheesy as ever — but, in compensation, drums not previously available to the user (conga, guiro and the second snare) have been liberated from their preset patterns, to be played like any other. Velocity can be switched in to drive instrument pitch, which has a disturbing effect on the otherwise cool snares, but is decidedly funky when applied to hi-hats. Another cracker.

The last resident of the Beat Room that we looked at (more are being added) is the StyloDrum: a drum machine that never existed before. It was built from the pops, crackles and glitches of a hoard of Stylophones, some distinctly tetchy after years of being forced to play 'Amazing Grace'. StyloDrum's character is anything but graceful. It brings to mind circuit-glitched nastiness, yet its percussive wonders were created not with a soldering iron but via external processing such as looping and time-stretching. There are four preset kits spread over four octaves and, although control over these is minimal, there is sufficient variation in the lo-fi thumps and howls to deliver reliably whenever you're inclined towards the dark side.

As well as typical controls for level and pan, every Drum Room instrument is fitted with a set of basic effects, typically bit reduction, saturation, drive or distortion, and a compressor. It's a decent little toolset for injecting bite and punch into these dinky analogue kits without losing that all-important simplicity. At these prices, this collection certainly deserves its four stars. Paul Nagle