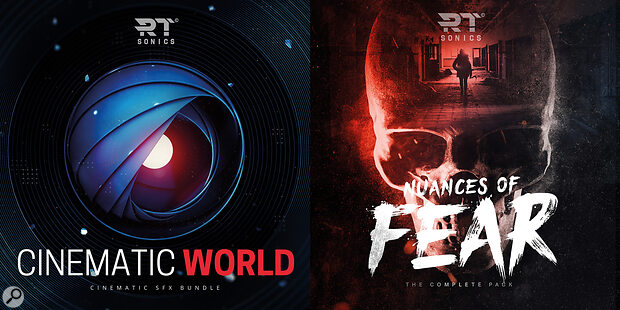 While RT Sonics may be a relatively new company, the individuals involved have some high‑end credits for their sound‑design work within the film, trailer and video games worlds. The Cinematic Bundle combines two of the company’s existing libraries; Cinematic World and Nuances Of Fear. These are both sound effects collections and, combined, there are nearly 1200 individual sound effects and over 5.5GB of sample data provided, so there is plenty to get your teeth into. However, RT Sonics are keen to stress quality (in both the recording process and sound design) and not just quantity. To reflect those high‑end ambitions, all the samples are presented at 24‑bit, 96kHz resolution.

In a somewhat old‑school fashion, the samples are provided as WAV files for you to drag and drop into your DAW or sampler instrument of choice. It’s a simple approach but remains very flexible. Within each library the material is organised into two groups; designed and source. As the names suggest, designed samples are those that have been created and processed by the sound design team, while the source samples provide high‑quality original recordings of real (unprocessed) sounds.

The WAVs have been carefully named — Dark Atmosphere, Deep Sub Hit 1, Metal Impact 3, Magic Whoosh, etc — and this makes finding what you are looking for relatively easy. It’s worth noting that, in most cases, each individual WAV actually features multiple sounds within a similar style, so those 1200 individual sounds mentioned earlier are actually contained in closer to 400 WAVs.

Cinematic World’s contents provide a broad palette of sounds and, while there are lots of impact, hit and riser‑style sounds that would undoubtedly work to scare your audience, it’s suitable for more than pure horror. Unsurprisingly given the title, Nuances Of Fear is more obviously targeting a scarefest. Hits, risers and impacts again abound, but there are also some impressive resonance, drone, transition and atmosphere sounds, some of which are extended in length. Across both libraries, the designed sounds are dominated by the big and the bold. However, don’t overlook the source‑based samples. These might be more subtle but there are also some gems to be found when something less bombastic is required.

Of course, the modern film, trailer and video game composer is absolutely spoilt for choice when it comes to sound effects sample libraries so RT Sonics face plenty of very credible competition. However, there is no doubting the quality on offer here; these samples would most certainly feel at home dropped into a high‑end blockbuster movie, action trailer, or AAA video game. And epic fear, terror and horror will undoubtedly result. On a practical level, some potential purchasers might have liked to see Kontakt instruments included but, if you are prepared to work with the WAV format, RT Sonics' Cinematic Bundle provides some epic ammunition for your sound effects arsenal.