Based in Japan, Discovery Sound have a wide range of sample CDs. Their Ethnic series comprises Amazing Thailand, Bom Dia Brazil, Techno Lama, Legend Of China, Discovery Japan, Shamisen, Digeridoo, Voice Percussion and Okinawa Tradition. The subject of this review comprises an audio CD and an Acid/WAV/REX 2-format CD-ROM. The audio CD kicks of with a demo track, closely followed by a generous selection of short percussion loops, typically just a couple of bars long. This section includes both drums and gongs, as well as some tuned percussion phrases.

From there it's on to stringed instruments and wind instruments, before moving on to male and female voices. Interestingly, the stringed instruments contain multisamples and, as most feature a fairly fast decay, it's easy enough to load them into a sampler, as you don't have to worry about looping. Of course there are also string phrases and some suitably raspy sustained bowed-string multisamples, some of which would need looping. Some of these phrases are wonderfully plaintive, while others are more strident, and all capture the genre beautifully. The same recipe carries through to the wind instruments, which include flutes and some reeded pipes. The female vocal phrases are lovely, though I haven't a clue what they're singing about, and there are also some equally inscrutable spoken phrases. The collection finishes with ambient backgrounds from places like markets and restaurants, more often than not with traffic or air-conditioning noise in the background. That's the end of the sound content, but, for those interested in learning more about Thai music, there are 24 short movie clips of the various instruments being played.

Overall the recording quality represented here is impressive, though I would have much preferred the multisampled instruments to be available in a broadly supported sampler format, such as Akai, Gigastudio, Halion, or EXS24. The samples are wide-ranging and well recorded, and the REX 2 option is also particularly welcome, as it enables loops to be used over a range of tempos, so that you can fit the sampled phrases in with existing arrangements. Paul White

The bulk of this new Chronic Music hip-hop collection is made up of nearly 70 construction kits, which do the usual job of giving a burst of the full groove followed by its component loops. Tempos range from 68bpm to 136bpm and the kits are well put together, with lots of layers and interesting one-off touches. All the basics are present and correct, with the drum loops well programmed and the bass good and deep. The melodic elements are a nice mixture of real and synthetic instruments, with some nifty guitar work, smooth keys, and synth washes. Percussion samples and loops are also well utilised, with conga, bongos, and even tabla cropping up. The welcome inclusion of some subtle DJ skills, so often missing in other hip-hop collections, really injects some added interest.

In terms of style, the kits cover a huge amount of ground, from smooth laid-back R&B grooves, to more upfront urban styles. The influence of the Neptunes is heavily in evidence, as is the choppy, electronic funk of influential producers like Dr Dre, Timbaland, and others. Of course, with so much material, not everything is going suit any one producer's specific needs, but the sheer number of samples means anyone with an interest in hip-hop/urban sounds would be able to find something useful.

The first three CDs also include a selection of pretty good (if a touch noisy in places) scratching, and over 300 guitar riffs and loops. The key/tempo-grouped guitar licks are good, making use of some nice tremolo and funky wah-wah effects to create tasty riffs to cut and paste. CD four bucks the construction-kit trend and instead focuses on a huge assortment of single loops and hits, starting with 350 drum loops grouped by tempo. The live drum kit is varied and the beats sound fresh, played with the right dose of hip-hop sensibility and groove. The programmed loops are equally well put together, with the right amount of booming kick and crisp snare. I also liked the wide use of electronic percussion.

Completing this rhythm section is a good selection of bass guitar lines (sorted by key and tempo). These are fat sounding, as you'd expect, with some nice filter/wah-wah effects, especially on the slap lines. Although a good chunk of the samples are too busy for my taste, for raw material ready to be chopped up in a sampler they are just the job.

After some well-played keyboard riffs, which are a bit too polite (with the exception of the excellent clavinet loops), the remaining chunk of CD four is taken up with vocal samples and a comprehensive collection of single drum hits. The vocals are split up into sections of talkbox phrases (let down by some sloppy editing), female sung hooks, and some male rapped shouts and ad libs. The female vocals are very good, with urban-styled hooks and phrases that really wouldn't be out of place in any of the pop R&B/hip-hop tracks in the charts. The rapped section also works well, with the two vocalists sounding the part and managing to avoid most of the usual hip-hop clichés. Once again, the editing of the samples could have been better.

LA Riot V contains a huge amount of source material for anyone wanting to put together any flavour of hip-hop or urban music. Although the kits lean more towards the newer, pop-based hip-hop styles, the sheer amount of material here, especially on CD four, makes LA Riot V a very handy collection of usable, authentic samples. Oli Bell 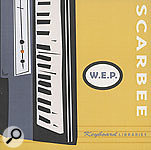 Scarbee's Fender Rhodes 73 Stage Piano (reviewed in SOS March 2003) was a great success, and it's a pleasure to report that the company have now turned their attention to another classic vintage keyboard, the Wurlitzer 200A electric piano. Cheaper (and therefore more widespread) than the Fender Rhodes, this instrument was first manufactured in the early 1950s, popularised by Ray Charles and The Beatles, and later featured by Supertramp — but don't hold that against it!

As with the Rhodes project, Thomas Skarbye went to the ends of the earth to get the sound of the good old Wurli just right. Prior to recording, the Danish musician instigated an extensive restoration process, which, from the hapless instrument's point of view, must have felt like being experimented on by aliens. Virtually every reed was replaced, the power transformer ripped out to eliminate mains hum (always a problem with Wurlitzers), preamp transistors updated, broken knobs fixed and dampers adjusted. Finally, the piano was tuned by the crude but time-honoured method of adding solder to a reed to flatten its pitch, or filing it off to make the note sharper!

Considering its relatively unsophisticated design, the Wurlitzer is an expressive instrument with a surprisingly wide tonal range. To reproduce this, the producer took samples at 16 different dynamic levels, matched by a corresponding set of 16-dynamic release samples. The piano has 64 notes from A1 to C7 (middle 'C' being C4) — the Wurli's top five notes are undamped and didn't require release samples — so the total sample count comes to 1968.

The Gigastudio version (about 1.2GB in size) sounds and feels great. At times you'd swear you were playing the real thing — all its dynamic nuances have been captured, from a subdued, delicate harp-like tinkle to a biting, reedy twang. Anyone who has played a real electric piano will appreciate the utterly realistic and subtle note-off effect created by the release samples. My partner and I compared WEP to her beloved Wurlitzer 200, and found that the Scarbee version sounds practically identical, even down to the characteristic tremolo effect (now assigned to the mod wheel). The real instrument seemed to have slightly more bite, but that's probably a by-product of its rather trebly built-in speakers — play the Scarbee version loud through a stage combo amp, and it would take your head off. In one important respect, the samples are better than the real thing: there's no bloody noise!

Why all this trouble over an old electric piano? As Mr Skarbye points out, it's soon going to be impractical to service this fine instrument, let alone take it on the road. By performing such a painstaking sampling job, Scarbee have effectively kept in circulation one of the great sounds of pop music. Its trademark mains hum may now be consigned to history, but thanks to this library all the desirable qualities of the Wurlitzer electric piano live on to fight another day. Dave Stewart 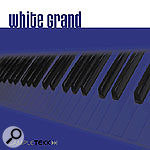 Talk about pushing the envelope — in an attempt to provide the most dynamically expressive sampled piano ever, the Sampletekk White Grand incorporates 36 different samples per note (16 dynamic layers for pedal up, 16 for pedal down, and four dynamics of release samples). With over seven octaves (A0 to C8) to cover, that's a scary amount of samples, but the producers made life a little easier for themselves by sampling only the white notes. (Maybe that's why it's called the White Grand?) According to my calculations, a 'grand' total of 1836 samples were performed on a Malmsjo nine-foot grand piano and recorded at 24-bit resolution.

It isn't possible for a musician to consistently perform 16 distinct dynamics on fifty-odd piano notes, so my guess is that the player generated a large number of dynamically varied samples which were later analysed and graded accordingly. (The alternative would be to haul in a mechanical arm programmed to strike the keys with a predetermined degree of force, but the slightest miscalibration could see the piano reduced to matchwood.) The 16-bit Gigastudio version (which will only run on Gigastudio 160) requires 3.5GB of disk space, while the Halion and Kontakt versions (available in a choice of 16- or 24-bit resolution) consume 4.8GB.

The piano is cleanly recorded with a natural stereo image, and its samples are clear, noise-free, and precise, with plenty of presence. The dynamic range is exceptionally wide — for the first time, we can hear the soft, closed timbre of very quiet piano notes gradually opening up in response to increments of velocity. As the volume grows, the timbre becomes naturally brighter, until one arrives at the brilliant, ringing sound of fortissimo notes. To capture a piano's timbral transition from soft and warm through to hard and steely with no apparent 'jumps' is quite an achievement. Pressing the sustain pedal engages a complete new set of 16-dynamic 'pedal down' samples, their glorious sustain benefiting from the additional sympathetic overtones of other strings. The piano's bottom register sounds big, strong, and stately, its samples dying away naturally with no looping. The tuning complies to the industry standard of 'A' at 440Hz, ensuring that this instrument will layer successfully with other keyboards.

The White Grand is technically beyond reproach, and musically, its bold, assertive sound will work fine in a pop/rock setting. However, it's hard to imagine jazz and classical pianists warming to its slightly middly tone and rather percussive attack, both perhaps the result of miking too close. But piano sound is an intensely personal thing, and while it's hard to be absolutely objective, what is beyond doubt is that Sampletekk have reproduced the tonal nuances of this Malmsjo grand to an unprecedented and impressive degree. Dave Stewart