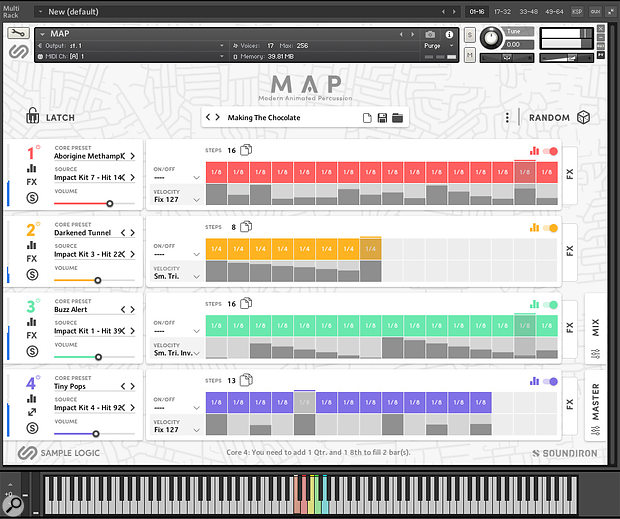 Modern Animated Percussion represents a collaboration between two well-established sample library/virtual instrument developers: Sample Logic and Soundiron. As suggested by the title, this is primarily a percussion instrument, with over 6000 sounds/presets, nearly 14,000 samples giving over 5GB of content. This is all presented via a contemporary Kontakt front-end (it requires the full version of Kontakt, v5.8.1 or higher) and, according to the manual, the intention was to give the user the polish and convenience that audio loops deliver but with the flexibility that a virtual instrument combining drum machine, pattern sequencer and step-based effects can bring.

Let's start with the basic sounds. There is a huge array of both conventional and unconventional percussion instruments that have been sampled for MAP. These span orchestral, various 'world' sources, elements of a standard drum kit as well as all sorts of electronic, 'found' and processed sounds. A MAP preset provides four cores (slots) for loading sounds and, if you disable the step–sequencing options for a slot, you can trigger sounds manually. This is useful for hand-playing performance options, but not where the real fun is to be had...

That lies in the individual step–sequencing engines for each of the four sound cores. Here you can adjust the step count, step length, velocity, pan, transpose, stutter, and a user-defined selection of up to six effects, all on a per-step basis. The creative possibilities are pretty much endless and, while there is a certain amount of tabbing between different sub-panels required to access all the features for each sound core, MAP is easy to use and a heck of a lot of fun to play with.

The incentive to find your way round is provided by the huge collection of supplied presets, as these easily demonstrate the considerable potential. Very usefully, the preset system operates at various levels — from a full four–core preset down to an individual effects sequence — and you can load these separately. Equally, there is an impressive randomisation system that can also operate at various levels. Separate mixer and master effects sections are also included.

If you dial back the effects, then you can do some fairly conventional percussion patterns. However, MAP is undoubtedly at its creative best when you fully exploit all those excellent step-based effects; less conventional percussion perhaps, but certainly more 'modern'. On a technical level, you can only create a single pattern sequence for each of the four sound slots within a single instance of MAP; it would have been great to see the option for keyswitching between different patterns. That said, multiple instances can run easily enough and the RAM overhead is not large. Otherwise, the only downside is that the price will put it beyond some. That said, MAP really is very good indeed and would make a great tool for modern electronic music production or for media composers.