Harald Bode was perhaps one of the most important audio innovators of the 20th century, but his work is not widely known today. In a list of inventions as long as your favourite patch cable lurk polyphonic, touch-sensitive and modular synths from the ’30s and ’40s; and in the ’60s, a ring modulator/frequency shifter/vocoder trio that was licensed to Moog. Why am I telling you this? Because the Bode Frequency Shifter is the inspiration for the subject of this review, SonicCharge’s Echobode. 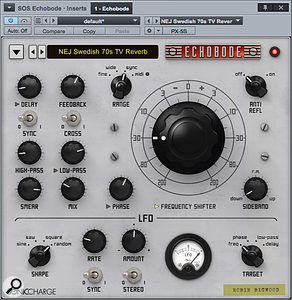 Frequency shifters differ from pitch-shifters in that they don’t attempt to preserve the harmonic relationships of the source audio. Pitch shifts up or down, and in the process becomes a rather freakish, metallic, bell-like version of its former self. There are overlaps with ring modulation, which, let’s face it, is not exactly sought-after for general production duties. However, Echobode is not a straight frequency shifter but a delay, with the shifter inside the feedback loop. That makes it a hell of a lot more useful, and flexible.

Instantiated in your DAW, the retro-looking controls are arranged in two main sections, underneath a patch selection area and a useful ‘main menu’ that offers undo/redo, patch randomisation and other commands. The top part has all the parameters for the delay and frequency shifter. Below is a tempo-sync’able LFO with a choice of waveforms and the potential to modulate one of four different parameter targets. MIDI notes can also be used as a modulation source, incidentally, making it possible to ‘play’ the shifter parameter.

What becomes clear through experimentation, or exploration of the many supplied patches, is that Echobode can be both subtle and extreme. Among its more restrained treatments is a whole range of phaser and chorus effects, courtesy of the delay time’s ability to be modulated with very smooth, analogue-like behaviour. Also, when only very small frequency shifts are dialled in, inharmonicity doesn’t become a musical deal-breaker; if anything, it adds to harmonic complexity. At the other end of the scale, however, lies audio mayhem: screaming sirens, or thick, gyrating tone clusters triggered by single notes or hits. The frequency-shift process generates side-band frequencies, like aliasing on steroids, which Echobode will suppress with miraculous efficiency or allow through completely unimpeded according to the setting of the Anti Refl[ection] knob. If the latter doesn’t let your inner Karlheinz Stockhausen out, then I don’t know what will.

Most surprising, perhaps, is a nice line in rather splashy, wild reverbs. They’re all down to the Smear knob, which scrambles phase coherence across the spectrum of the signal passing through the feedback loop. The character is a sort of bizarre meeting of ’70s plate with budget ’80s hardware effects box. Not the slightest bit naturalistic, but highly characterful, distinctive and likeable. Incidentally, Smear is a feature addition that differentiates the plug-in version of Echobode from its Reason Rack Extension counterpart, which has been available for some time.

Like other SonicCharge plug-ins, Echobode is not everyday, put-it-on-every-channel-strip fare. It can be persuaded to do conventional delay-based stuff, but is really much better suited to strongly flavoured, blatantly artificial, sonically-arresting treatments with more than a hint of the random and chaotic. The implementation of the plug-in is anything but chaotic, though, and SonicCharge software is really polished, from installation and authorisation through to stability and audio quality. Highly recommended, but not for the faint-hearted. Robin Bigwood