The kalimba (aka 'thumb piano') has long been a featured sound on keyboard workstations. Also known as the sanza, likembe and mbira, this traditional African instrument consists of a row of metal tines attached to a small wooden box and makes a delightful, thunky little noise, ideal for melodic rhythm parts. Hitherto, the limited pitch range and buzzy, rattly sound tended to limit the application of such samples, so it's heartening to report that Soniccouture's new Array Mbira library blows away those restrictions. 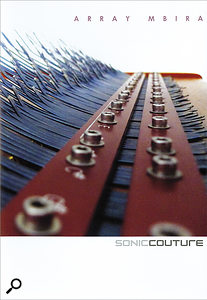 Designed by American instrument builder Bill Wesley, this particular Array Mbira is a 30‑inch wide, cherry-wood box fitted with 150 closely spaced curved metal tines, giving its upper surface the appearance of an angry porcupine. The large box creates a long, resonant sustain and, although the characteristic metallic plucked attack is still there, the overall tone is much purer, richer, smoother and more satisfying than that of an ethnic mbira.

A greatly increased pitch range spans five octaves from a practically subsonic low C to B nearly two octaves above Middle C. Soniccouture recorded the notes in semitone steps with triple round robins at eight dynamic levels, and also carefully captured the delicate 'clunks' that occur when mbira notes are hand damped. The result is a beautiful and authentic‑sounding sampled instrument that can handle chords, melodies, rhythm parts and bass lines to great musical effect.

Extras include a set of played five‑octave strums (made possible by the real‑life instrument's juxtaposition of parallel octaves), which have a rather solemn, bell‑tolling atmosphere. Users can also generate their own multi‑octave strums with the mod wheel, an enjoyable facility that put me in mind of a strummed autoharp. In the sound‑design department, a terrific arpeggiator patch got my creative juices flowing, while composers requiring unusual, spooky and atmospheric sounds will relish the haunting tones of 'Brian's Church' and the whale‑song‑like pitch bends of 'Porpoise'. The effects section (which includes delay, phasing and convolution reverb) is also first class.

The 24‑bit stereo sample data is duplicated in simultaneously recorded, miked and DI'd versions, the latter taken directly from the Array Mbira's built‑in pick‑ups. Kontakt 4's sample compression reduces the 9.5GB of raw sample data down to a mere 4GB when installed. The Kontakt instruments are pretty RAM hungry, however, consuming 1GB or more of RAM.

This fabulous contemporary instrument maintains an African flavour while transcending the rough sonorities and musical limitations of its ancestors. I found I invariably needed to reduce patches' release settings to prevent notes from hanging on indefinitely, and also felt compelled to turn the 'thumb' control (which governs the duration of the small thumb noise preceding the note attack) to zero in order to avoid notes seemingly speaking late. Those minor technical considerations apart, the Array Mbira is ready to rock straight out of the box and a delight to play. Dave Stewart