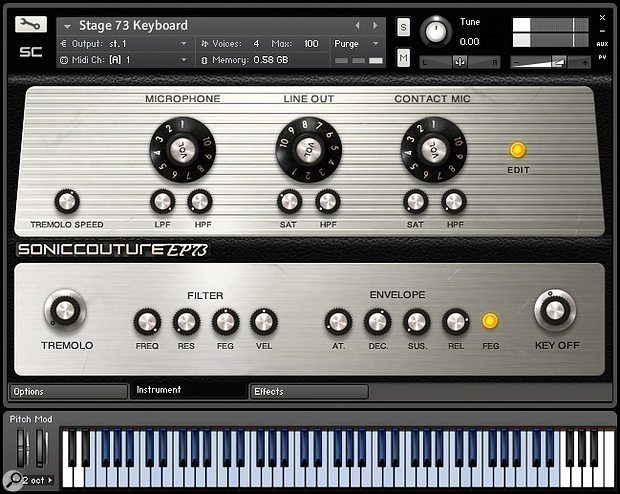 The Fender Rhodes Stage 73 Mk1 electric piano epitomises the clear, cool, bell-like tone of an instrument that has never really gone out of fashion, and whose keys have been caressed by such keyboard giants as Joe Zawinul, Chick Corea, Herbie Hancock, Stevie Wonder and George Duke.

By sampling each of its 73 keys at 11 or 12 dynamics, with three round-robin alternations, Soniccouture have reproduced the essential sound of the Stage 73 with great fidelity. If you bang it, the piano snarls, barks and distorts, as in real life; play it more reverently and you're rewarded with a delightfully pure chime and a full-bodied, sustaining tone with plenty of presence and bite. Forget the synthetic, sugar-coated twinkle of the 'DX Rhodes' 1980s pop ballad sound; this is the real deal.

A close listen reveals small irregularities on a few notes: G2, G#2 and F#3 have an unclean attack, and the piano's characteristic bell tone takes a dip in the vital D#4-A#4 register above Middle C. I guess this goes with the territory in a 40-year old instrument, but such minor anomalies could be said to add character to the overall sound, and will probably go unnoticed by anyone who hasn't played a real Rhodes.

As well as covering the usual performance bases in depth, Soniccouture make a point of playing their sampled instruments in unconventional ways (hence 'deconstructed'). In the case of EP73, this includes striking the instrument's tines with a small steel mallet, creating a lovely cross between a child's toy piano and an African kalimba. The tines were also bowed (a spooky, synth-like slithering texture) and plucked with a plectrum, making a beautifully precise, metallic timbre reminiscent of a musical box. In addition, a sound-effects menu contains eerie, harp-like glissandi, scrapes and worrisome knockings, along with some genuinely scary, disembodied howling noises you'd never guess originally emanated from a Fender Rhodes.

Unlike the larger Suitcase models, Rhodes Stage pianos had no built-in speakers and no stereo tremolo effect. No problem: the effects section (which includes tremolo and a cool auto-panner) transforms the raw mono samples into a majestic panoramic spread, and the on-board compressor, overdrive and speaker emulations can make the pristine sound of the piano more aggressive and poky.

This 8GB library's large sound-design department includes breathy, sonar-like sustains, Ondes Martenot-like 1940s sci-fi noises, underwater church bells and some exquisite, ethereal pads. Applying Soniccouture's 'mod wheel auto-strummer' to the 'Cascade' patch produces celestial arpeggios that recall the above-mentioned Mr Zawinul's work on 'In A Silent Way'. So extensive as to be almost a separate library in their own right, these inspiring sonic confections bring a historic and perennially hip instrument bang up to date.