Xtended Piano is the latest offering from London‑based Soniccouture. It's a significant expansion of their (Bowed) Piano library (still available for Kontakt, EXS24 and Live) that was reviewed very favourably in these pages back in July 2008. 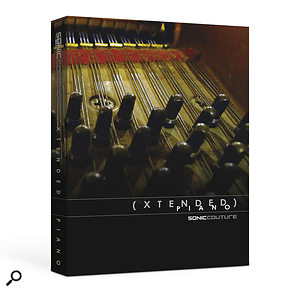 The sounds on offer here are inspired by the 'extended' piano techniques associated with various avant‑garde composers of the last 75 years or so. One of the most well‑known, John Cage, would meticulously 'prepare' grand pianos, wedging various bits of metal and rubber into the string courses, while Henry Cowell wrote works that required the strings to be plucked and strummed directly with the hands. Fascinating stuff, but hardly of mass appeal. However, Soniccouture have been a bit clever here, offering a handful of Kontakt Player instruments that provide the colour and character of this unusual sound world, but that are also musically useful.

The Bowed Piano instrument encompasses three variations: sustained loud and soft, and an abrupt staccato. The mod wheel fades between the two sustained sounds, and to seamlessly switch in the short variant, you click a toggle button in a dedicated Instrument tab, or use a keyswitch. As Dave Stewart discovered in his review, the sound is strangely beautiful and evocative. In different registers, you're reminded of tamburas, wine glasses and waterphones, and the short articulation is weirdly clarinet‑like low down. Smart alternate sample allocation creates a remarkable sense of aliveness and subtle unpredictability.

Mallet Piano presents the same Baldwin SD10 nine‑foot grand, but this time played with wooden or softer marimba beaters. The tone is surprisingly short-lived and not particularly beautiful, but maybe that's its strength. It lends itself to African or Indonesian‑inspired ostinato accompaniments, as if it were a giant thumb piano. Equally, it's just perfect for those sparse, dislocated bass note stabs — think Jerry Goldsmith and Planet Of The Apes and you're right there.

Much the same could be said for the Mute Piano. Played conventionally from its keys while the strings are lightly touched on a harmonic node, the sound produced is an octave and a fifth higher than the fundamental: luckily, Xtended Piano does the appropriate pitch remapping for you. Key‑release noise is adjustable from 'off' to thunderous. As for musical character, this one's schizophrenic: harp‑like and delicate at one end of the velocity scale, noisy with a sort of Bartok pizzicato snap at the other.

Winning the beauty contest, undoubtedly, is Plucked Piano. Its two variations, one damped and one not, have the strings plucked by hand with a Jim Dunlop USA Nylon 0.73mm plectrum. With no damping, the strings ring for a long time, as if it were some huge, über‑resonant dulcimer.

The final Instrument, SFX Piano, is a wide‑ranging collection of 127 string scrapes and glisses, one per MIDI note. While some are clearly identifiable as piano‑generated, others most definitely aren't; spindly, metallic whooshes nestle up against freakish moans and thumps — Count Dracula's coffin lid meets Radiophonic Workshop! I doubt any of them will show up in your next hit record, but they'll fit right into a horror-film score or dark computer-game soundtrack.

That's not the end of the story, though: there's a whole range of sound-design options available in three user‑interface tabs. Under the Instrument tab, for example, you can choose to work with four 'Natural' or many more 'Synth' parameters that reach into Kontakt Player's synthesis and effects architecture. There's a sine‑wave LFO, routable to filter or amplifier, and two envelope generators. The filter section itself includes both resonant low‑pass and high‑pass types, simultaneously active. A Layers section allows you to override the round-robin sample allocation so that all of a note's alternative samples sound simultaneously, with options to detune them, spread them across the stereo field, and introduce phase shifts. It's like a cross between a chorus and a synth 'unison'.

The Effects tab serves up a potent tape saturator, phaser, simple delay and convolution reverb. Included impulse responses include two different piano soundboards (for convincing resonance effects), with a range of conventional acoustic spaces and artificial reverbs too. Twenty or so additional 'SFX' IRs explore convolution's more creative side, and some (like 'Stone Ghosts') are eerily beautiful. Xtended Piano instruments can further pass through Kontakt Player's own mixing and effects architecture, where you find another convolution reverb, plus filters, delays and tone processors.

A real pièce de resistance is the Performance tab. As well as some basic real‑time parameters that I've mentioned before (like articulation key‑switching), what appears here depends on what instrument is loaded. The Bowed Piano gets a truly weird and wonderful Glissando module, unlike any portamento or pitch‑bend implementation I've seen before, that winds sustained tones up and down in pitch over the entire audible pitch range and beyond. It's instant horror suspense, but push it further and you're into bizarre, gurgling aliasing territory. The Mallet and Mute Pianos have a 'Jammer' instead, which is a sort of semi‑randomised arpeggiator that can do tremolando and more besides. Even better, though, is the Plucked Piano's 'Strummer': hold down some notes, turn the mod wheel, and it triggers them repeatedly across many octaves, as if you're running your fingers up and down a vast autoharp. It can be reconfigured to respond to other MIDI continuous controllers too, in case you want to trigger the effect from a knob or pedal, perhaps.

It might be niche, and you mightn't use it on every project, but this is a great sample library. Sound quality, consistency and playability are all top-notch, and it's both inspiring and flexible when you need it to be. Robin Bigwood