To create their piano samples for the Eighty Eight, Sonivox recorded a Steinway CD327 using an unspecified, high‑quality signal chain. The result is over 11GB of content, formatted so that it is accessed via an attractive interface which is modelled to look like a polished wood cabinet with knobs on. No help menu or PDF manual exists, but the interface is delightfully simple, providing just the sort of rudimentary controls seen on hardware digital pianos. Still, more detail about the library presets and controls would be useful. 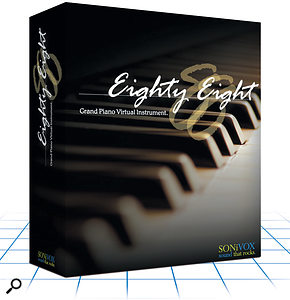 Sonivox claim the Eighty Eight is "the world's most realistic virtual piano”, although such things are immeasurable, given that all pianos sound different to one another. It's certainly true that both the good and not‑so‑good characteristics of this particular grand have been vividly captured. First impressions are of a warm but responsive instrument, but many of the bottom notes are coloured with a tonal ring, their frequencies causing something in the setup to resonate. F‑sharp 1 and G1 are particular bad in this regard. Further up the board, the mechanical action of the hammers becomes fairly noticeable as the masking bass frequencies drop away, but this is an attractive artifact, and one that really helps the samples sound convincing. Other nice touches include a release control that affects the sound level of the damper sample.

The only other issue is that, where the damper ends at G‑sharp 6, the transition feels too abrupt, perhaps a result of close miking or differences in gating and compression.

Most of the presets make use of the EQ, Reverb and Limiter sections, although each of these does have an on/off button. Reassuringly, the piano still sounds really good with everything turned off. The processing is simply implemented; you can't change the listening perspective, for example, but at least simplicity makes for fast adjustments. A group of three controls set the levels for each section when performance‑oriented combi and pad presets are loaded, for example. The combis also include some useful double‑bass samples on the bottom split, piano in the middle, and lead instruments, such as trumpet and guitar, at the top.

In terms of its market position, Eighty Eight is slightly more expensive and memory hungry than Garritan's basic Authorized Steinway, but much less, on both accounts, than the Professional Edition.

For the player, hearing the output from a speaker or headphones will never match the real piano feel and, when scrutinised in isolation, the limitations of the sampling process start to reveal themselves, but I suspect that most people will hardly notice during normal use, and certainly not by the time it is recorded. Tom Flint