Following the modus operandi of offering very focused and specific sample libraries, Sonokinetic have turned their attention to the concert harp for their latest offering, Arpeggio. Offering over 4GB of uncompressed samples in a single Kontakt instrument, this collection provides a level of detail and playability that's light years ahead of a typical sampled harp and, in doing so, breathes new life into this often neglected instrument. 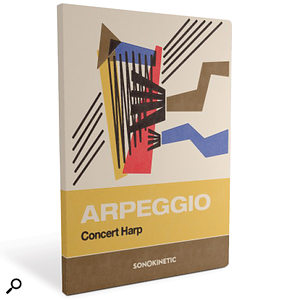 The Kontakt instrument itself is very well laid out, with all of the sound variations presented as buttons in the main interface, as well as having the familiar keyswitch option to change between them. The variations available are Short, Sustain, Flageolet, Picked, Bisbigliando (literally meaning 'whispering', but think of it as a kind of tremolo effect), FX‑free Improv, FX Chord Improv, Pres De La Table and Glissandi. The first four of these, along with Pres De La Table, provide variations on a theme of chromatically playable harp patches, with the different options giving tonal variations as well as muted or sustaining sounds. The two effects patches offer a number of different atmosphere‑invoking sounds based on either mainly single notes/chords (FX Free) or more melodic patterns (FX Chord).

The final option is the Glissandi patch, which brings us to the part of the harp's repertoire that people are probably most familiar with. The sweeping glissandi offered here go several steps further than most harp samples, in offering a choice of major, minor, diminished, pentatonic and whole-tone scales, along with up (single), down (single) and up and down (repeating) variants. And, as if that wasn't enough, each of the glissandi has the option to be tempo‑sync'ed to the host software.

As with all of the other Sonokinetic sample collections I've looked at, there is a built‑in convolution reverb available, with a rather nice and simple user interface, on the second tab of the Kontakt window. Only a single reverb impulse is provided, but the relative mic position can be selected using a visual representation of a concert hall, which, while not strictly necessary, certainly looks very nice. On the third tab there's a three‑band EQ, which is a useful tool for adding further tonal variation.

I think that many people would relegate a harp to purely orchestral or atmospheric duties, but doing so would be a terrible shame, in my opinion. I have used harp sounds in funky, disco‑influenced tracks on many occasions, to great effect, and they could easily be used in any place where you might normally use a pizzicato string. The benefit of a library such as Arpeggio is that the sheer quality of sound and number of usable variations is likely to encourage people to use these beautiful tones in more diverse situations. I would love to own a real harp one day, as I think they are beautiful and majestic-looking instruments but, until that time, at least I have Arpeggio to give me its sounds in the most realistic way I could hope for. Simon Langford