Vocal choirs can be very powerful and emotive, but most of us do not have the resources to use a real one in our compositions. Olympus Elements is an affordable alternative, derived from Soundiron’s massive Olympus Symphonic Choral Collection. The original sampling was of a 63-voice choir singing eight articulations (Ah, Ee, Eh, Ei, Ih, Mm, Oh and Oo), resulting in over 3000 24-bit, 48kHz samples.

The most common interface type Olympus Elements has to offer provides tools for shaping and controlling articulations. Independent control sections are provided for male and female voices and each section can be muted or blended together.

Setting up a patch is a matter of selecting one of the eight articulations, choosing between sustain and staccato, setting the swell, attack, offset and release of the sound envelope, and then deciding on its pan position. It’s also possible to restrict/expand the key range, and there is a whole set of controls just for legato. Finally, there is a master section with convolution reverb, vibrato and EQ. 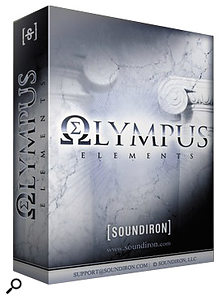 Initially the interface looks quite complex, but the controls soon start to make sense, and if anything it would be better to have a few more options. For example, being able to draw in a level contour to have the level fluctuate over time would be very useful.

In terms of fundamental styles, there are Sustains, True Legato, Staccatos, Marcatos, Choral Effects and Ambiences folders containing Men, Women, and Ensembles interfaces. There are also Divisi versions of the above where the layer ranges have been limited to match ‘real-world’ alto and soprano singers.

A totally different set of tools is provided by the Phrasemaster interface. In essence it is a step sequencer that enables the user to assign syllables to as many as 16 steps. Each time a note is pressed the next step is triggered. It then gets a little more complicated in that each step has solo and mute buttons, plus buttons for selecting and deselecting the male and female sections, and controls for applying Marcato or Staccato characteristics to each syllable.

Each set of steps forms a Phrase, and Elements has 16 Phrase memories, all of which can be selected using dedicated keyswitches. Naturally, this makes the interface very useful for performance work. There isn’t quite the control necessary for recreating the disturbing Omen theme by Jerry Goldsmith, but you can certainly capture that kind of feel with the phrase tool!

Sound wise, the vocals are really appealing and powerful, as one would expect from what is basically a ‘lite’ version of Olympus Symphonic Choral Collection. Inevitably, particularly with vocals, the way the instrument is played determines how natural it sounds (holding a note until another is played automatically triggers legato for ‘non-true-legato’ samples, for example), and its artificial nature is most exposed when playing long notes, but if multiple instances and interfaces are combined cleverly, some pretty good results can be achieved. Tom Flint