The sound of an SSL console is now available in an even smaller package - and at a smaller price.

SSL's original Duende was a great success for the company, which is not surprising given that it uses external DSP to provide the Mac or PC user with all the key EQ and dynamics components of an SSL console channel-strip in VST, Audio Units and RTAS plug-in form, all without overloading the host computer's CPU. Even so, not everyone could afford to splash out on one, so at the January NAMM show this year SSL announced that they were building a third-rack-width 'little brother' version that would provide the same channel-strip EQ and dynamics software as its big brother, but with a 16 mono-channel limit at sample rates up to 96kHz. Connection is, again, via Firewire, which can also power the unit, though a mains power-adaptor port is included for situations where Firewire power is not available. A second Firewire connector is provided to facilitate linking.

The original Duende (which is now known as the Duende Classic) was reviewed in the August 2006 issue of Sound On Sound, and, given its similarities to the Duende Mini, that article is worth reading as a supplement to this review.

While the Duende Mini may look small and dinky, the hardware inside the box is essentially the same as in the original Duende, and by purchasing an unlock code (for around £230) you can boost the performance up to 32 channels. It is also possible to run two Duende units on the same computer, to provide up to 64 channels. The Mini comes with the original EQ/Dynamics Channel plug-in based on the company's C-Series digital console algorithms, although you don't get the Bus Compressor as standard, as you do with the bigger model; it has to be bought separately (for around £230). However, the initial hardware cost is around half that of the original Duende, so you get a lot of functionality for your money. Optional plug-ins, other than the Bus Compressor, currently include the X-Comp, the X-EQ and the DrumStrip, all of which come on the install disc as time-limited demos. 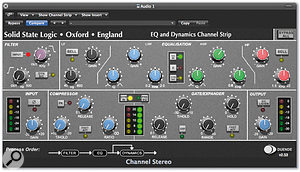 The SSL Channel Strip plug-in is supplied with the Duende Mini; other plug-ins are optional.Most relatively up-to-date computers can work with the Duende Mini, and the range of supported plug-in formats means that the majority of DAW users can use it. For Windows users, the minimum requirement is for an Intel Pentium IV or AMD 1GHz processor or higher, Windows XP SP2 or higher, 512MB of RAM (1GB is recommended), 80MB of free hard drive space, 1024 x 768 screen resolution, an Internet connection for software updates and a free FireWire 400 port — although I have used a Duende sharing a port with an audio interface and experienced no problems. Mac users will need a G4 or later running OS 10.4.8 or above, but all of the other requirements are identical to the recommended PC spec. For my test with a MacBook Pro running the current version of Mac OS 10.5, I needed to update the Duende software to the latest Leopard-compatible version after installation, by visiting the SSL web site.

The Duende Mini works exactly like the original Duende, so when everything's installed you're ready to call up the plug-ins in the same way as you would native plug-ins. The only thing to keep in mind is that any external DSP-powered box of this type increases latency, usually by doubling whatever latency is currently set in your DAW, so it can be best to use DSP-powered plug-ins only when mixing — where latency doesn't matter.

I found that the Duende Mini system ran flawlessly once I'd installed and updated the software as detailed above. One slight problem, though, is that the demo plug-in versions really make you want to spend more money on those extra plug-ins! However, the Channel plug-in that is supplied as standard is more than satisfactory, providing a very polished-sounding four-band parametric EQ, an expander/gate and a great general-purpose compressor, all with intuitive user interfaces, familiar SSL-style graphics and a useful pair of side-chain filters.

As I said earlier, if you're not familiar with what the original Duende offers, you'll want to look up the original review on our web site. Suffice to say here that if having a slice of real SSL console in your DAW appeals, the Duende Mini is a cost effective way to buy into the system, and you can then upgrade as and when you can afford it.

A cost-effective alternative to the original Duende rack unit. You don't get the Bus Compressor and the channel count is limited to 16 unless you pay for the 32-channel expansion code, but you still get an awful lot for your cash, and you can upgrade when you need to.