This neat modular system slots together in no time at all, and is surprisingly effective.

Studiobricks, a company based in Barcelona, were created to meet a genuine need. Sax player Guillermo Jungbauer, who then worked as a plant manager in the car industry, decided that he needed an isolation booth — but he felt that none of the existing available products was suitable. The Studiobricks approach to vocal booths (and drum booths, and so on) is a precision-engineered modular system of components that slots together, without the need for any tools. All the wall blocks simply slot together, leaving joints so tight that even the pyramid builders would be jealous! Importantly, this results in both a practical degree of sound isolation and well-controlled internal acoustics.

Every booth is assembled and dismantled prior to shipping, to make sure it all goes together without problems. All the parts arrive on a palette, which is far too heavy to lift without machinery, so the individual parts need to be lifted off and then carried to where they will be needed. You then need to spend a short while assembling it: at a recent trade show, a couple of the company’s specialists dismantled and then rebuilt the booth several times, taking less than 20 minutes to strip it down and put it back together. I’d suggest you allow a little longer, but it gives you a fair idea of what’s possible — it shouldn’t take much over and hour from start to finish.

Being a modular kit, if you decide at a later time that the booth you purchased isn’t big enough, you can buy and add just the parts you need to extend it, rather than having to sell your existing booth and upgrade. The extensions can be in multiples of 300mm in either direction. All the components come numbered, with detailed instructions showing in what order to assemble the parts. 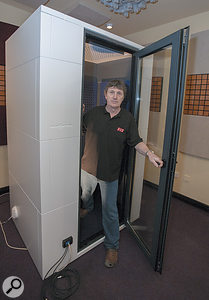 Hugh Robjohns and I looked at the basic model, the One vocal booth, which is based on a 140mm-thick double-wall structure. For the booth to go together properly, the provided base, which has an MDF surface, must be absolutely level; there are height adjusters beneath to compensate for uneven floors, and a few minutes spent with a spirit level pays dividends later on. Each of the wall modules comprises CNC-machined MDF panels which sandwich a layer of acoustic insulation. The edges are bevelled slightly, both to improve the aesthetics and to reduce the number of sharp corners that might get damaged. There are also corner posts. All these parts slot into the floor and into each other using something akin to a tenon-joint topography, forming a tight acoustical and mechanical seal. The flawlessly smooth paint finish (off-white on the review model, but other colours are available) makes the outer skin look like plastic, and when complete the booth looks very classy indeed.

Entry to the Studiobricks One model that we tested was via a fairly conventional double-glazed door, with what looked like an 18mm air gap, again designed to slot into place during assembly. When the walls are complete, the roof drops on like a lid, with its own weight holding it in place. Windows and doors (with or without glass) are also available as options. Air conditioning (AC) is also an optional extra, but I’m told most customers purchase this, and it really is worth having. The slim-profile internal AC unit is unobtrusive and almost silent, and warm air vents out through the roof of the booth, where it’s taken though a baffle system in the roof with offset entry and exit points, to prevent noise ingress. As standard, there’s a fitting to bring cables through the side wall (you specify where you want this when you order), though you’ll probably need your own choice of wall box on the inside. Other options include a strip light and, on the larger models, a choice of internal acoustic panels. The standard model has acoustic panels on part of the walls and on the ceiling, to produce an acoustic that’s suitable for voice-over and vocal-booth applications.

Hugh and I spent an hour or so examining the booth and checking its isolation capabilities. Though not totally soundproof, the degree of attenuation is impressive, and not just at mid and high frequencies, but also at the low end, where a none-too scientific measurement with an iPhone App on music playback showed in the region of 25dB reduction. To put this in practical terms, a loud music playback system was set up a few feet from the booth putting out a level of around 95dB, as measured at the booth door with the door open. With the door closed, the noise level was low enough to record vocals with negligible spill.

Both Hugh and I noticed that the booth floor was prone to booming when we tapped our foot on it, so we suggested that packing the space beneath the floor with mineral wool slab before building the booth might result in a less boomy surface, and may also further improve the sound isolation. It would also be possible to add a layer of barrier mat to the inside floor surface before putting down another layer of carpet, should further damping be required.

Overall, we were impressed by the mechanical quality, the acoustic performance and the appearance of the booth, not to mention that fact that it could be dismantled and moved to another location with relative ease. Its isolation properties are comparable with other non-modular booths, and with the internal treatment fitted vocals were nicely dry without any audible hint of boxiness. Investing in this kind of system isn’t cheap, but the cost is very reasonable when you consider that it includes shipping from mainland Europe, that it’s likely to last a lifetime, that you can extend it in the future if you need to, and that you can take it with you when you move house/studio. Paul White

Studiobricks One booth, as reviewed, with mirrored door and ventilation kit £4422 including VAT.

Top 10 Boring Things That Are Really Important In The Studio
3 days 7 hours ago.