Toontrack's Superior Drummer, currently at v2.3, is well established amongst the elite of virtual drum instruments. It provides all the mixing, microphone and ambience options you could possibly need to fully control your virtual drum kit in just the way you might if you were lucky enough to be working in a top-notch recording environment. Of course, to get the best out of these tools, you need some equally top-notch drum samples, and Toontrack now have a fabulous and quite varied collection of these as well. The latest release, New York Studios Vol 3, sees them returning to the world-class Avatar Studios (formerly The Power Station and with a client list that reads like a Who's Who of musical icons) and the same production team (Neil Dorfsman, Pat Thrall and Nir Z) responsible for a number of the other SDX packs. 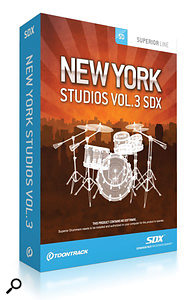 The format follows familiar ground: you get three full drum kits (Ludwig, Slingerland and Rodgers), some additional snares ,and a range of different cymbals. The full library runs to 18GB of sample data but, if you want a more streamlined approach, you can opt for smaller-footprint options, including a 4GB basic install. As well as each kit in the raw, a small number of alternative presets are included (and you can, of course, create your own), as is a MIDI library of grooves.

Drum sounds can be both genre-specific and very much a personal thing. However, while these are all classy-sounding acoustic drum samples, even within this single expansion pack there is a decent amount of variety. So, for example, you get a fairly crisp sound from the Slingerland and high-tuned GMS Aluminium snares, while the Ludwig and Burned Edge Zebra snares have a little more low-end punch to them. Equally, the Rodgers kick is tighter sounding than either the Ludwig or Slingerland models. And given the level of control offered by SD2, you can easily customise the sounds further from these excellent starting points. The toms and cymbals are equally varied and equally classy; you can easily hear the potential these samples would have in a range of musical styles from chart-friendly pop through to garage rock, with all sorts of stops in between.

Like the other Toontrack SDX packs, this one comes with a set of MIDI grooves. In this pack, the grooves range from ballad through to rock (there is even a rather excellent basic reggae selection) and cover a wide range of original tempos. The grooves are organised into song-based subsets, and in a particular style or time signature you're given more than enough patterns to start building a complete drum performance. The value of these grooves should not be underestimated; they ooze quality, and if you already feel you have enough actual drum samples, the MIDI pack can be purchased separately.

In New York Studios Vol 3, Toontrack have another hit on their hands. If you're serious about your drum sounds, this SDX for Superior Drummer 2 is worth hearing. John Walden