As off‑putting as I found the name of this drum expansion library (I'm pretty sure that a sample library alone isn't going to bring me a number one hit!), I have to say that I was quite taken with it. In terms of the drum machines sampled here, there's nothing like the comprehensive list that you'd get from, say, Best Service's Drums Overkill, but the quality is universally good, the MIDI side of things is well thought out, everything's well organised and easy to access and the processing twists (that were reportedly done by Niklas Flyckt of Britney Spears' 'Toxic' fame) really do breathe new life into the familiar old sounds. Flyckt has also apparently donated some of his own sample collection, so there are a few sounds here you won't get anywhere else. 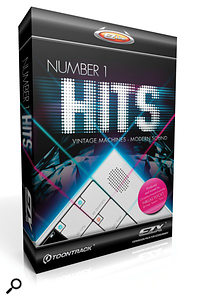 Sonically, it's a flexible library and it should lend itself to any genre using electronic drums, from pop and electronica, through house and techno to hip-hop and its myriad related genres. All samples have been processed to some extent, via an impressive recording chain (according to the published list, though who really cares what it was recorded through, as long as it sounds good?), but there are both dry and reverbed versions of most sounds. That's a nice touch, because the reverbed versions are well‑judged and make for some great instant satisfaction if you plan to build your beats first and then construct your track around them, while the dry ones either allow you to go for a drier sound or put more work in to get the 'right' ambience for your track.

Given the price and quality on offer, I'll give a five‑star rating, although it would really be nice to see a little more content here, and it seems a shame that you have to have EZ Drummer to use this library; there are an awful lot of Kontakt and EXS24 users out there who I'm sure would like to be able to add these sounds. If you do have EZ Drummer or Superior Drummer, though, and you need a palette of electronic drums, I don't think you'll be disappointed with this. Matt Houghton