Ever since Toontrack launched EZ Drummer as the lightweight counterpart to Superior, they've been adding expander kits to it to cover just about any commercial style. All are meticulously recorded in world-class studios using the best kits and cymbals available. The latest addition to the collection is Pop! and, given that pop music can mean almost anything, this is a pretty big brief for a style. So what exactly are they giving us for our 59 pounds? 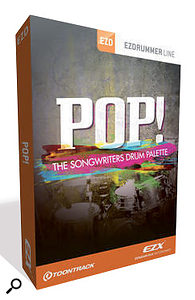 The answer is a collection of 10 mixed and matched drum kits augmented by custom percussion pieces for snaps, claps and so on, the aim being to cover as much ground as possible across rock, pop, indie and dance genres. All sounds were selected and remixed by Toontrack's Head of Sound Design, Mattias Eklund, many drawn from previously unreleased recordings made by the company. So there are 10 kits based on arrangements of 10 different kicks, 10 different snares, five sets of toms and five sets of cymbals and hi-hats. The extra percussion includes instruments such as shakers, tambourine, maracas, handclaps, cowbell, claves and bells. There's also the usual generous library of MIDI grooves that can be dragged and dropped into your DAW via EZ Drummer.

Because of the extra percussion, the mixer page is quite wide, with the final fader being given over to gated reverb. Preset kits can be called up via the usual menu on the upper left, but because there are so many choices of drum, you can have real fun putting together your own kits and then saving them as user kits. The default kit is just a nicely recorded, general-purpose acoustic drum kit that would suit any number of styles, but you also get Funky, Rock, Tribal, Jungle, Club and Aggro, to name a few, so the range really is pretty wide, also including some electronic percussion.

The recording standard is what you'd expect from Toontrack: clean and solid, with plenty of multisampled depth, ranging from natural acoustic to snappy and aggressive. That gated reverb also works really well giving a classic gated sound. While I can't guarantee that these kits will meet every need, the range on offer is so wide and the cost so reasonable that pretty much every EZ Drummer user could benefit from it. My only criticism relates to EZ Drummer itself, not to the expander packages, and that is that there's no way to build your own kit by mixing and matching elements from the different expander kits you have installed. That said, this particular kit offers more mix-and-match possibilities than most, which makes it particularly versatile.

All in all, this is a useful grab bag of different drum kits and components with a little percussion and gated reverb thrown in. Paul White