The latest v8 update to Universal Audio’s UAD platform brings with it full Yosemite OS support for Mac, a raft of new plug-ins and a new version of Console allowing multiple Apollo devices to be combined to behave as a single device. The new plug-ins, which run on UAD2, Satellite or Apollo devices, include the Distortion Essentials Plug-In Bundle, the Friedman Amplifiers Plug-In Collection and Wood Works. Distortion Essentials models three classic overdrive pedals including the Ibanez Tube Screamer, while the Friedman Amplifiers Plug-In models a couple of British-voiced amplifiers that have a distinctly Milton Keynes flavour about them. With Apollo hardware these can be used in real time with no latency penalty, as can Wood Works, which was created by UA development partners Sound Machine.

The nearest hardware equivalent to Wood Works is probably the Fishman Aura pedal, and both have a specific aim: to improve the sound of a DI’d acoustic guitar fitted with a pickup system by ‘remodelling’ the body resonances that are suppressed when under-saddle pickups or magnetic soundhole pickups are used. 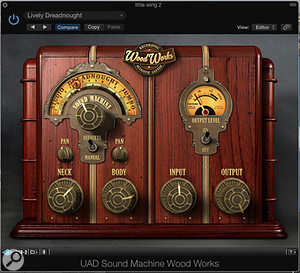 Behind all the GUI’s fancy retro wood and brass, Wood Works has relatively few controls, making it easy to set up. A rotary switch selects from 16 modelled guitar body types, four designated as Studio (small-bodied guitars), eight as Dreadnoughts and four as Jumbos. The other clever part of the plug-in is that it further processes the signal to split it into what you might expect to hear from a mic over the neck and another over the body, with separate level and pan controls for each. You can choose whether the Neck and Body level controls are reset to factory default positions when you change guitar types, or left in their last positions. Either way you’re still free to make subsequent manual adjustments. To the right of the plug-in are input and output level controls plus an output level meter with a bypass switch. And really that’s all there is to it.

There’s no explanation of the underlying technology other than that it uses a form of modelling, but whatever is going on, it isn’t just simple EQ but more like the complexity you’d hear from a fingerprint EQ that has hundreds of EQ bands. In any event, Wood Works does a pretty good job of injecting believable character into the sound. Not only can you completely change the character of the guitar, but Wood Works also lets you rebalance the virtual neck and body mics as you mix with the added benefit that, if inserted on a stereo track, these can be panned apart to create a sense of stereo spread.

In practice, the best way to use Wood Works is simply to spin the dial to find the guitar type that sounds best for the song you are working on, then balance the neck and body levels to taste. You can always add further EQ with another plug-in if you need to, just as you might when miking a guitar, and a little added artificial room ambience also helps give the end result a sense of existing in a real space. In fact the only control I felt might be usefully added is one to morph between your original guitar sound and the modelled sound for those occasions where the modelled sound might sound a little overdone. Having said that, I used the plug-in to revisit some old songs I’d recorded with a band I play with, and in all cases, the DI’d acoustic guitar sound worked better in the mix after processing.

A side-benefit of the modelling process is that in addition to creating more of a miked-up tone, the brittle attack of a typical piezo pickup is somehow softened but without losing any of the essential sonic sparkle. Some of the smaller Dreadnought models also do a passable job of turning a clean, DI’d electric guitar sound into a pseudo-acoustic, and if the guitar is fitted with piezo saddles, then the illusion gets even closer. Overall then Wood Works is a genuinely useful tool with a learning curve that’s so flat you could cycle up it in top gear.