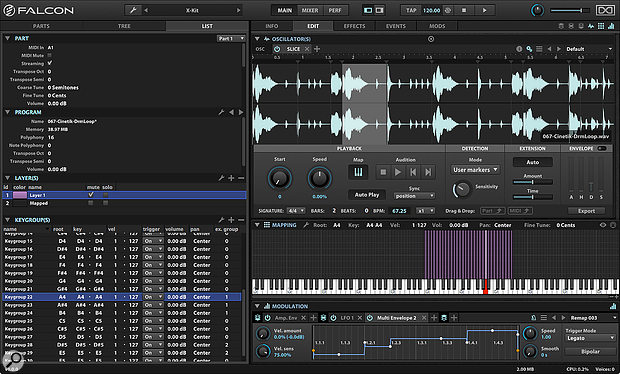 UVI are a French software development company who make a wide variety of instruments, sample libraries and workstations. Falcon is UVI’s latest creation and may well be their most complex. It can be run as a VST, AAX and Audio Unit plug-in, or in stand-alone mode, and uses the iLok method of authorisation to provide unlimited installations and up to three concurrent authorisations on any combination of computer hard drives or iLok dongles.

It features a DAW-style mixer with up to 17 pairs of outputs, and supports UVI sound libraries (of which there are many), so one of its functions is to act as a sample library player. However, rather like NI’s Kontakt, it has the tools of a sampler as well as scripting support, so that third-party developers can create their own libraries with custom interfaces that will run from within. Falcon also functions as a sound design tool. As standard, it ships with a pretty impressive set of generators, processors and effects (as well a small but lovely-sounding bunch of sound presets), but can be expanded further by purchasing other UVI-compatible products.

At every level there is the option of using modulators, audio effects and MIDI event processors such as arppegiators, script processors and micro tuners.

Falcon is a complex beast and a little daunting when first opened, but it’s possible to get some results very quickly by throwing some oscillators into a blank patch and playing around with the results. In the main window, where most of the programming work takes place, the centre portion of the interface shows the various hierarchy components, with Program at the top followed by the rest of the tree underneath. At the bottom is the Keygroup section and it is here that the oscillators are installed. On the right of the main window there are several tabs, one of which calls up a list of oscillators when it’s clicked. Anything from the list can be dragged across to the centre, dumped onto a mapping grid and played using the grid’s virtual keyboard. It’s then just a matter of extending or compressing the active key range of the oscillator by dragging it across the grid with a mouse. No limits are placed on how many oscillators can be used, and they can also be overlapped in any combination.

What’s important to understand is that the word ‘oscillators’ is used in its broadest sense, and covers a wide range of processors, many of which are very complex. For example, there is one called Slice which automatically slices up any audio file dropped onto it (according to various settings made by the user), and provides a button that instantly maps the slices across the keyboard. Others include a very impressive wavetable oscillator equipped with a great number of wave shape options; granular and stretch oscillators, which both process whatever samples are dropped onto them; and an FM oscillator. There are many others too, including a set customised for drum kit elements, so the user has much to explore.

Having created something that makes a sound, or several different sounds, you can experiment further by adding effects, modulators and MIDI events to the components. This is done by clicking in the relevant section of the hierarchy and selecting the desired effect or processor from a menu, or by selecting them from the right-hand browser menu and simply dragging and dropping them in place, just as with the oscillators.

All this is pretty easy to do, but things get complicated when a Program has multiple Layers and Keygroups, and it soon becomes necessary to refer to the structure tree, which is available to view in the left-hand panel of the interface. Of course, there is also plenty that can be done by assigning modulators to controls, and doing so is simply a matter of right-clicking on the relevant control and choosing a modulation source from a menu. Or, for those who are happy to code, there is the Script Processor which can either be used through its own user-friendly interface, or via an external text editor, like MS Word. Lua is the language used.

Soundwise, Falcon’s vast array of effects and processors are very impressive and they handle whatever external samples are thrown at them with ease. It would take a much longer review to detail all that’s on offer, but suffice to say that almost every tracking, mixing and mastering effect/processor that one can imagine is present in some form or other.

Overall, though, Falcon is not quite as user-friendly as it could be. Despite playing with it for many hours, with frequent reference to the 194-page manual, I found its structure hard to follow. It’s clearly very powerful and has a lot of potential, but there is something about its design which seems a bit back-to-front to me. That said, I never got on too well with algebra or double-entry book keeping, so others might take to it like ducks to water.

Falcon does allow the user to play presets without doing any programming, but it’s really aimed at programmers and sound designers who want to explore the possible outcomes of routing, interconnecting and layering oscillators, processors and effects, not to mention instrument developers who want to use it as a platform for their libraries. It’s everything from a multitrack sample-playback engine to a complex sound editor, synthesizer and sampler. The variables are so vast that dabbling with it is a bit like scratching in the dirt to find out what lies at the earth’s core, which is neither satisfying or particularly revealing. But for those who enjoy digging deep and aren’t afraid to get to grips with its detailed manual, Falcon has a huge amount to offer.