Designed by engineer David Blackmer in the early 1970s, the Dbx 160 series of compressors have enjoyed continued popularity, especially when working with drums, because their tight and assertive character helps make things sound big and punchy. The original Dbx 160 was a hard-knee compressor; later variants included soft-knee versions, but Waves’ emulation is modelled on the original hard-knee design. Blackmer’s design used a VCA built from discrete components as its gain-control element. This VCA was later produced as an integrated circuit by THAT Corporation, and has since been widely used in compressors and VCA-controlled automated consoles. Blackmer’s innovations also include the RMS side-chain detection circuitry used to drive the ‘feed-forward’ gain control configuration of the Dbx 160. 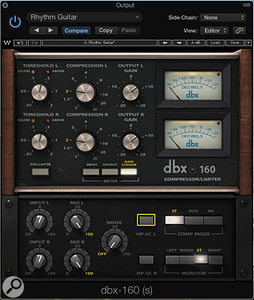 There are already digital emulations of the Dbx 160, not least on Universal Audio’s UAD platform, but Waves have collaborated with Dbx to extend its capabilities with a few up-to-date additions that can be accessed by means of a separate drop-down panel. These features include a Mid/Sides matrix, a wet/dry mix control for setting up parallel compression, noise-floor control and a choice of mono or stereo operation. All the common Windows and Mac OS plug-in platforms are supported, and authorisation can be to a specific computer or any suitable USB memory stick.

The adoption of auto attack and release times that respond to the envelope of the input signal makes the Dbx 160 very simple to set up, as other than adjusting the output level, there’s really only the Threshold and Compression controls to think about. The compression ratio can be set from from 1:1 through to hard limiting, with a maximum gain-reduction capability of over 60dB, meaning that the Dbx 160 can manage anything from gentle ‘audio glue’ compression to seriously slamming drums or pumping dance mixes.

In addition to having the standard Waves plug-in features relating to saving, loading and comparing, the interface draws on the cosmetics of the original with its wooden side cheeks, large VU meter and radio-style buttons for switching the meter to read input, output or gain reduction levels. There are just three control knobs, labelled Threshold, Compression — in essence a ratio control — and Output Gain. An external side-chain feed can be selected where appropriate, while a Collapse button toggles the visibility of a lower panel containing the additional parameters. These include input level adjustment, wet/dry balance and a knob that simulates the circuit noise of the original, should you feel it is needed for the sake of authenticity.

Waves have also added switchable side-chain low-cut filters that are useful in situations where the bass end of the sound is having too much say in how much gain reduction is being applied. Three further radio buttons select mono, stereo or Mid/Side operation with four more to set the monitor mode, which can be set to Left, Right, Mono or Stereo.

Despite the minimal set of controls, the Waves team have managed to create numerous factory presets. These make good starting points, though you’ll invariably need to adjust the Threshold control to suit your recorded material. At the polite end of the scale with compression ratios of 1.5:1 or less, a low Threshold setting produces a subtle ‘glueing’ of the mix elements without making any really obvious change. As the ratio is increased, the style of compression becomes more assertive — just as you’d expect from this particular compressor. What impresses is the tight, punchy character of the compression, and at the same time, the high-frequency elements in the material never seem to suffer as they do with some other compressors. The Dbx 160 is often talked about as a drum compressor, and I have to admit that drums is what it does best, though it’s also worth trying on bass parts, electric guitar and even vocals. There are plenty of worthy compressors out there capable of acting as ‘mix glue’, but if you need to add attitude to a drum part or even to a whole mix, the Dbx 160 really comes into its own.

None of Waves’ new controls gets in the way if all you want is old-school authenticity, but in a real-life mixing situation, they prove very welcome in setting up parallel compression or applying M/S processing to stereo mixes where centre-panned signals need a different compression treatment from side-panned material. Waves are to be applauded for getting so close to the character of the real Dbx 160 while not shying away from adding the extra controls to make the compressor more relevant to the way mixes are made today. If you’re a fan of the hardware version, I don’t think you’ll be disappointed by this plug-in.