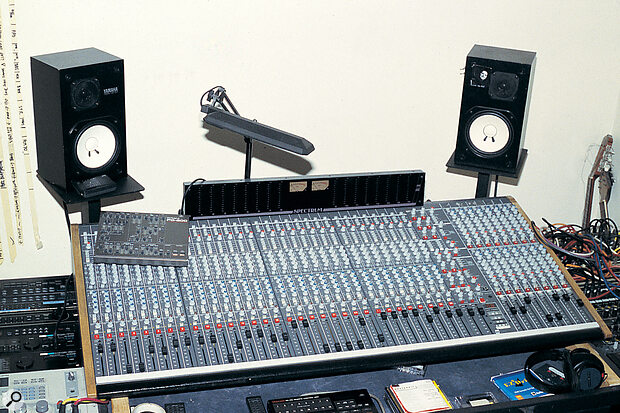 A good, simple monitoring setup. Speakers are properly spaced, firmly mounted and "toed‑in" to point towards the listener's ears.

Not even the best monitor speakers guarantee good monitoring — so how do you ensure that you're mixing on the best possible system? Mixmeister Martin Walker leaks some top speaker tweaks...

The final quality of your music depends not only on your skills at mixing — having a reliable monitoring setup is vital to the process. Perhaps the biggest problem faced by those who record in personal studios is that their mixes don't 'travel' — they may sound great on your own loudspeakers, but they sound decidedly unbalanced when played back through other systems. Although you can throw more money at the problem by buying more expensive speakers, this is only half the answer. Indeed, many people create wonderful mixes on very cheap speakers; the art is in knowing how the mix will sound elsewhere. No, the solution is to make sure that you are getting the best sound from whatever monitor speakers you are using, which doesn't necessarily mean spending any more money.

1. If you are about to buy new monitor speakers, or upgrade existing ones, choose something with a neutral sound. Although slightly aggressive, detailed‑sounding speakers are very popular, using such monitors as a reference may make your mixes sound bland through more typical systems. One school of thought says that if your monitors have any tonal trend at all, it should be the opposite to that of your music — so if you want music with lots of bass, mix on speakers that are not bass‑heavy, and vice‑versa.

2. If you have the luxury of expensive monitors with a very clean and detailed sound, remember that subtle background details in your mixes may be lost on more typical systems which have more colouration. For this reason it is still useful to double‑check on cheap and nasty speakers, and many engineers use two pairs of monitors — an accurate pair for detailed work, and a more 'typical' cheaper pair for checking how the mix will sound on a real‑world system.

3. Choose a sufficiently powerful power amp to drive the speakers properly. It is better to have a powerful amplifier connected to small speakers, coasting along with a super‑clean sound, than the other way round. Running a small amp flat out into expensive speakers is an easy way to get unexpected repair bills, since the amp may start clipping when you crank it up. Clipping removes the tops of the waveform, which generates lots of harmonics that could fry your tweeters. If you've ever had to replace your tweeters, this could be the reason, and a larger power amp may prevent the problem recurring.

4. Make sure that you use heavy‑duty cables between the amplifier and speakers. You don't need exotic hi‑fi ones — although some people swear by them — but cheap and nasty cable such as bell‑flex will compromise your sound, particularly at the bass end. Thicker wiring (some people use solid‑core cooker cable) results in a lower overall impedance, which in turn couples your amplifier more closely to the speakers, resulting in tighter and cleaner bass.

5. Speaker positioning can make a huge difference to the final sound. Nearfield monitors (used by most people apart from the dance fraternity) should ideally be about five or six feet apart, and about the same distance from your ears. You won't go far wrong if you position them on two corners on an imaginary equilateral triangle, with your head as the third corner.

6. Keep speakers well away from the corners of the room to avoid boomy bass, and follow the manufacturer's recommendations regarding position relative to the rear wall. Some designs rely on the bass reinforcement that you get when pushing the speaker close to the wall; others will sound balanced only when positioned well away from a wall in 'free space'. Try to place each speaker the same distance from side walls, otherwise they will sound different from each other and spoil the stereo image. It is also advisable to keep their distance from the rear walls as different as possible to that from the side walls, to minimise the effect of the room acoustics.

7. Tweeters should be at ear height, since high frequencies tend to be more directional. For the same reason most speakers benefit from being toed‑in slightly, by turning them so that both tweeters are pointing towards your ears. If you regularly have two people listening side‑by‑side, reduce this toe‑in slightly by pointing each tweeter at an imaginary mid‑point slightly behind your heads.

8. Check the speaker toe‑in angle by moving your chair forwards and backwards. If you are too far forward, central mono sounds will be hard to pinpoint, and moving too far backward will reduce the width of the stereo image. You will probably find an optimum position for your chair, and if this is too far back then your speakers either need moving closer together (or toe‑ing in more), and if you need to sit too close then they can probably be moved further apart. You'll soon get a feel for this, and it only needs to be done once.

9. If you can persuade some friends to help, speaker positioning can be carried out the other way round — by moving the speakers as you listen. Choose the most convenient position for your chair, and then have the speakers moved slowly further apart while you listen in mono. You should get a strong central image exactly halfway between the speakers, but after a certain width this will start to become indistinct.

10. Once speakers are roughly in the correct position, listen to a wide variety of well‑mixed stereo material, and adjust the amount of toe‑in in for the best sound 'focus'. Try moving your head slightly side to side to check for a suitably wide 'sweet spot' — although its size is dependent on speaker design, it is also affected by how you position the speakers.

11. Nearfield speakers should, as a rule, be mounted on rigid stands, although there are some heavy‑duty wall‑mounting stands available if you need a position close to a rear wall. If you are keen on DIY, you can find suitable plans for floor‑mounting stands in the November '95 issue of Sound On Sound.

12. However your speakers are mounted, the idea is to fix them rigidly in the optimum position. Any wobble or rocking will degrade your sound. Think of it like this: every time the bass driver cone is forced forward by the amplifier signal, the cabinet will try to move backwards. If the cabinet ends up moving in time with the music, it not only affects the bass end, but also the high frequencies which are now emerging from a moving source. As the wavelength of sound in air at 10kHz is not much more than one inch, your top end clarity and focus may be seriously affected.

13. Don't perch your monitors on a meter bridge — not only does this compromise rigidity, but the entire top surface of the mixer then acts like a mirror and therefore artificially boosts mid‑range frequencies. You can demonstrate this effect by putting a duvet on top of the mixing desk and listening to the difference this makes to the sound.

14. Many floor‑mounting stands have adjustable spikes, which are ideal for ensuring that the speakers are both level and stable, even on uneven floors. Placing some pieces of Neoprene (or three or four blobs of Blu‑Tack) between speakers and stands will provide a firm fixing, but still leave a tiny amount of 'give' so that bass frequencies won't rattle the floorboards and spoil the bass end.

15. After everything is in position, re‑check your monitoring system by listening to some well‑produced commercial mixes. If there are still problems in the sound, it will probably be due to the acoustics of your studio/room. Many books have been written about studio acoustics, and if you aspire to producing commercial releases you may need to consult an expert, but there are still many simple things you can do to improve most rooms...

16. Start by making sure that your recording gear is arranged in a reasonably symmetrical arrangement. To ensure the best stereo sound, the left and right halves of your room should ideally be mirror images of each other. You should also try to prevent strong audio reflections bouncing back from the wall behind you and interfering with the direct sound from the speakers.

17. Unless you have a large, acoustically treated room, avoid using monitors with an over‑extended bass response as this will only excite troublesome room modes and give you a false idea of what the bass is doing. A low‑end cutoff of around 60Hz is quite adequate for most small project studios. Furthermore, a high bass output makes it harder to concentrate on the crucial mid‑range — whilst it may impress your clients, it will probably result in a worse mix.

18. Strong early reflections from nearby objects in the room will muddy the sound and cause problems with the stereo image. Imagine that each speaker has a laser beam emerging from it. The direct (and strongest) path is directly between the speaker and your ears. However, there are various other important paths that involve only a single reflection (for example bouncing off the ceiling, or the mixing desk).

You can check for strong reflection paths using a mirror — get someone to hold it on the walls, ceiling, and nearby large objects between your normal listening position and the speakers, and when you can see the speaker in the mirror you have found such a point.

19. Don't put nearfield monitors on their sides (unless they are dual‑concentric types) as the sound from the tweeter and bass/mid unit will move out of phase if you move even slightly from the exact centre of the sweet spot. Sideways monitors may look trendy, but they don't work nearly so well as setting them up properly.

20. Finally, check your mixes on several other systems. There is no such thing as the perfect monitoring system and, even if there was, you would still need to check how your mixes are likely to sound on the more modest setups used by most normal listeners. If your mix still sounds good on the car stereo, and in mono through a single 3‑inch speaker, you'll know you've done your job well.

A meter bridge may look like a convenient place to put your monitor speakers, but proper stands will give better results. Nor should nearfield monitors be placed on their sides.