On a recent visit to Leeds School Of Music I decided to hold a quick Q&A session — taking advantage of being surrounded by so many talented musicians — to see if they had any questions they wanted to ask a sound engineer. A short discussion quickly threw up several issues, my responses to which I have given below.

Two string players in the LSM audience had suffered negative experiences of recording, and both wondered why the microphone didn't seem to capture the sound of their instrument, and instead sounded "scratchy”. They also said that the normally comparatively dead acoustics of the studio made it very hard to perform naturally, as they had no room sound to work with. 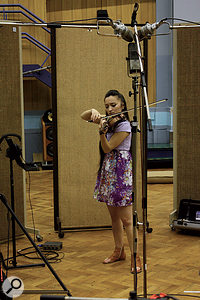 When you're deciding how to mic an instrument, it can help to have the performer play in several different places in the room. Once they locate a place that sounds good to them, use the 'listen and wander' approach to find the best mic position.I explained that I've had a lot of success using a low miking position about three feet in front of the cello, slightly off-axis. I always worry about going too close, as this can start to over-emphasise the strings and lose the resonance of the body. This tends to make the instrument sound scratchy and thin — something that had been picked up by the string players at Leeds.

I'm a big fan of the 'listen and wander' approach. This involves putting on a pair of headphones and walking with the microphone around the instrument, listening until I find a position I am happy with. This sounds obvious, but I rarely see engineers doing it.

I was also able to recount a very positive experience I had recording with a cello player recently. She had done quite a few sessions and was undaunted by the studio experience. Her first action was to find a quiet, sturdy chair that she then moved around the room while listening to the sound of her cello. She explained that the cello was very susceptible to over-present room nodes. These are points in the room where sound waves combine, boosting certain frequencies. Most rooms have this issue, unless they are very well designed, or are large and diffuse enough that the problems are dissipated. Once she had found the best position for her cello, where no notes were ringing out louder than any others, she allowed us to approach with the microphone.

When recording I also like to give the player a sense of space, as I would a singer. A bit of reverb can help recreate the more familiar sound of a concert hall and give the musician a more natural acoustic, which can help their performance. The reverb is added to the headphone mix, not recorded. It's rare that studios have a long enough reverberation time to make the instrument sound as full as it does in a concert hall, most of which have medium to long reverberation times.

My reply to the string players prompted a vocalist to ask if it was worth capturing the sound of the room when he recorded.

Singers benefit from a bit of reverb as well, to sing or play against — but as for recording the sound of the room, it depends on how it sounds! Most studios have a reasonably dry acoustic and short reverberation time. This is because reverberation is easy to add (artificially) but virtually impossible to remove from a recording! If I have spare mics and I'm recording in a nice-sounding space, I always try to capture some of the sound of the room. I quite often open a door and record the sound in the corridor outside. This works well with drums and guitars, although I haven't tried it with singers. However, I would keep the vocal or instrument reasonably dry and record the room sound on a different track. This room track has the advantage of being a natural sound, with all the complexities that involves, but bear in mind that long reverb tails can be tricky to deal with if you need to edit the recording.