I'm looking to get a decent reverb for my Pro Tools rig, and there seems to be lots of choice, and quite a variety of prices — is it just the shipped library of impulse responses that makes the difference, or is there a difference in the software? So far I have looked at Waves' IR1, Audio Ease Altiverb, Wizoo's W2 and Trillium Lane Labs' TL Space.

SOS contributor Martin Walker replies: Many musicians must have at some time wondered whether there's any audible difference if you load exactly the same impulse response into several different convolution reverb engines. Well, different reverb plug-ins can sound slightly different, although you might only hear this difference on high-quality monitors in an acoustically treated room. 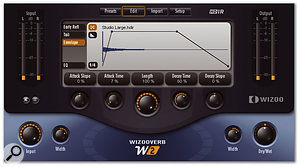 The price of convolution reverb plug-ins, such as Audio Ease's Altiverb and Wizoo's W2, has a lot to do with the library of IRs they come with.Perhaps surprisingly, with some convolution reverb engines you may also hear an audible improvement if you convert the impulse response itself from 24-bit to 32-bit floating point format — all you need to do is load the 24-bit IR into your audio editor, re-save it in 32-bit float format, and then load it into your normal convolution reverb plug-in. This doesn't add any extra resolution to the file, but can ensure that any rounding errors or gain adjustments during the convolution process itself are minimised.

On my PC I can certainly hear an increase in focus and transparency during reverb tails after performing this tweak on the excellent Pure Space IR libraries from Numerical Sound (www.numericalsound.com) when they are replayed through both Voxengo's Pristine Space and Waves' IR1 plug-ins, although your mileage may vary with other plug-ins, as it depends on their internal resolution. Try it with your own plug-in — apart from a 50-percent increase in IR size your processor overhead will be identical, so you've got little to lose.

Nevertheless, these are tiny differences. The price of a convolution reverb plug-in has more to do with its versatility — how many clever controls there are to manipulate the impulse responses to make them as useful as an algorithmic reverb — and, more importantly, its bundled library of IRs.

Although creating IRs is certainly not rocket science, and can be done by anyone with a mic, balloon and pin, doing it to professional standards in world-class acoustic spaces is an expensive and time-consuming business, so those convolution reverbs like Altiverb, Waves IR1, and so on that come with a huge library tend to be several hundred pounds more expensive than those that don't. Third-party IR libraries tend to be expensive for the same reason.

Some people may point out that you can download loads of free IRs from various sites on the Net, but although I applaud all the effort that's obviously gone into many of them, and they are certainly a good way to add to your collection, they mostly tend to be 16-bit files, which will restrict the dynamic range of your reverb to 96dB even if your audio tracks have been recorded with 24-bit resolution. Many of the free IRs I've tried have also been truncated, while a few have exhibited hums, or excessive background noise.

Ultimately, as always, you tend to get what you pay for. All four plug-ins you mention have very good reputations, offer plenty of scope for user adjustments, and are bundled with comprehensive IR libraries. However, they all differ slightly in their feature set and scope, so if you can, the very best way to choose is to demo them at a suitable dealer so you can try out different interfaces and get a better feel for the content of the libraries. After all, while some plug-ins are subject to fads and fashions, you'll still be using a good reverb for many years to come.