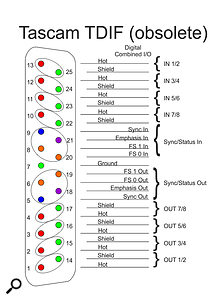 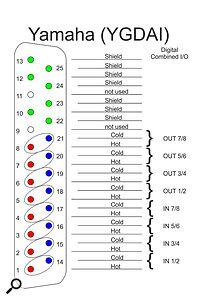 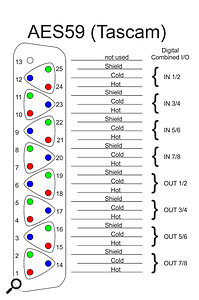 While other protocols such as T‑DIF and YGDAI use unique wiring protocols — and thus require special cables — the AES59 eight-channel digital format's wiring convention matches that of the analogue equivalent.I've just replaced my RADAR II 24-channel multitrack recorder with a newer RADAR Studio model. The RADAR II was connected using three eight-channel T‑DIF ports, whereas the RADAR Studio uses three eight-channel AES3 ports. However, both interface formats are physically connected using cables terminated with 25-pin D‑sub connectors, so I wondered if I can reuse the three original D25‑D25 cables on the new machine?

SOS Technical Editor Hugh Robjohns replies: The answer, unfortunately, is no — you can't use T‑DIF cables for AES3 connections. It's a common source of frustration that the 25-pin D‑sub connector has been employed by so many different manufacturers as a convenient multi-channel digital audio connector, because they all chose entirely different and incompatible pin allocations and wiring arrangements, even when they were actually passing the same AES3-formatted audio data. (I'm looking at you, Yamaha!)

However, in your case there's the added complication that the obsolete Tascam T‑DIF format is radically different from AES3 anyway. It passes eight channels of audio data in each direction in an unbalanced form, with their clocking and status information carried on separate wires. In contrast, the AES3 format carries embedded clocks and status information, and uses balanced connections, as indicated on the connector wiring diagrams on this page.

What this means is that the configuration of wires within the multicore T‑DIF cable is unsuited to conveying the AES format and, more importantly, the 'crossover' wiring between the connectors at each end of the cable (needed to route each output signal to its corresponding input connection) is also not compatible.

It's taken nearly 20 years, but we do now have a properly defined eight-channel AES3 interface standard which has been widely adopted and is known formally as AES59. It is based on Tascam's analogue multichannel interface format, and it uses exactly the same wiring layout. But instead of carrying eight channels in a single direction (as the analogue interface does), it carries four AES3 inputs and four outputs — so eight channels in both directions.