Are matched pairs of mics for stereo recording really so important, given that my preamps won't always be perfectly matched? Even if they are, does it matter if I just crank one of the mics slightly higher, say? I have one Rode NT55 and am enjoying it. Would it not work well for stereo applications if i just bought another?

SOS Technical Editor Hugh Robjohns replies: Preamps actually stand a very good chance of being matched to far tighter tolerances than any mic ever could be. A preamp only needs to match its gain and frequency response. Modern electronics mean that the frequency response can be flat from a few Hz to many hundreds of Hz within a fraction of a decibel every time, and with a variable gain control, gain matching between channels can be as good as your nulling technique — and easily to within a fraction of a decibel, again. 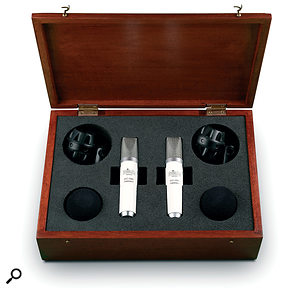 Many factors are involved in producing matched pairs of microphones, and they're highly recommended for stereo recording.Microphone matching is about much more than gain (which is easily corrected using the preamp gain control, anyway). It's also about frequency response, which can be affected by capsule age and condition, the way the capsule is mounted in the mic body, the condition of the protective grilles, and the tolerances of the electronics in the impedance converters of electrostatic mics. It's also about the linearity of the polar pattern: the sensitivity at different frequencies and different angles. This polar‑pattern precision is actually where the biggest differences occur between mics, and it is also what determines stereo imaging precision when you use the mics as a coincident pair.

There's a process for checking how well matched two mics are. You'll need a largish room, an assistant, and a reasonable monitoring setup.

1. Rig the two mics with one directly above the other, both facing the same way, and with their diaphragms aligned as closely as possible. The mid‑point between them should be at the same height as your assistant's mouth when standing.

2. Connect the two mics to a pair of preamps, set the gains of both preamps to their lowest (quietest output) setting, and monitor the outputs of the preamps, one routed to the left speaker and the other to the right. Check that both are working and ensure that there's no EQ or dynamics processing in either channel.

3. Get your assistant to stand directly in front of the two mics, a couple of feet away, and talk at a sensible level. Adjust the gain of one of the mic preamps (say, the left channel) to set a sensible level on the monitors.

4. Invert the polarity of the other (right) mic. Switch the monitoring to mono. Gradually increase the gain of that second mic (the right channel) until the signals from the two mics start to cancel each other out. Fine‑tune the gain of the second channel for the maximum null (ie. the quietest output). It probably won't disappear totally, but it should be better than ‑20dB at least, at all frequencies. If it isn't, the two mics aren't matched and aren't suited for coincident stereo applications.

5. With the on‑axis voice properly nulled, you can ask your assistant to circumnavigate the mics while talking constantly. If the two mics are perfectly matched in terms of their polar and frequency responses, the output should remain at least as quiet as the nulled on‑axis level. If the output becomes louder at any point — especially around the front half of the mics' pickup area — it's a very good indication that the mics aren't adequately matched for coincident stereo applications, and the result will be spatial errors and inconsistencies in the stereo signal. To get an idea of how bad that could be, remove the polarity inversion from the right channel, so that the signals from the two mics add constructively. With your assistant talking on‑axis to the mics again, you should hear loud, clear speech with a solid phantom image midway between the two speakers.

6. Switch the monitoring back to stereo. The image should not change; there should still be a solid phantom image dead‑centre. If it does move, something is horribly wrong with your monitoring chain.

7. While still listening in stereo, get your assistant to continue to witter away whilst walking in a slow circle around the microphones, maintaining as constant a distance from the capsules as they can. As the assistant circumnavigates the mics, you'll hear the level fall and rise, corresponding to the polar pattern of the mics. This is a useful test in its own right to check how frequency response changes with angle across the front, and where and how deep the rejection nulls are. For example, if the mics are cardioids, the level will fall smoothly from the front (12 o'clock) to about 3 o'clock — and you'll probably notice the HF response changing as the assistant moves off‑axis too. From the 3 o'clock position, the level will then fall faster towards the rear (6 o'clock), where you'll only hear room ambience and very little direct sound. The level will then build again as they return towards the front through the 9 o'clock position.

9. While the assistant travels around the mic, you should also listen critically for the stability of the stereo image. The two mics are facing the same way, and if they have identical polar patterns the image should remain rock solid in the centre. Any pattern differences at all will result in the stereo image pulling towards one side or the other, possibly only for small parts of the spectrum (for example, sibilances might appear to come from half left with a certain angle of incidence to the mic). You might well find you get image pulls around the rear of the mic, and that's not too important, but any obvious image shifts across the front half (the 9‑12‑3 o'clock region) means that the mics aren't suited for coincident stereo operations because their polar patterns are not sufficiently closely matched. If all is well, the mics can be used for coincident stereo recording.