For tracking a band in the same room, what are the pros and cons of using a Perspex drum screen? I imagine they reflect a lot of high frequencies back at the drummer, so does anyone have any experience with this colouring the sound in a good or bad way? How effective are they at isolating the drums from the other instruments? Would I be better off looking into absorptive panels?

SOS Contributor Mike Senior replies: The main advantage of a clear Perspex screen is obviously that you can see through it! Beyond that, the question is what you’re trying to achieve. The main situation where I would consider a hard, reflective screen like that on sonic grounds would be when trying to increase the amount of early reflections captured by the drum mics, in particular the overheads. Such reflections do indeed colour the sound but can certainly do so in a nice way — especially when overheads are placed above the kit, because the screen can be positioned to reflect into those mics more of the rich timbre that emanates horizontally from the snare and toms, and which otherwise wouldn’t be that well represented. You might also use a reflective screen like this if your overheads are quite tight in for spill-reduction purposes, because that might help retain a more holistic impression of the kit from close up. (Alternatively, I’ve had good results with using a second pair of overheads in such circumstances instead.) 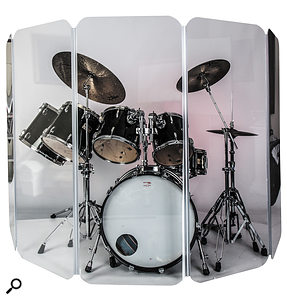 Perspex drum screens (such as this one by UK company Drumscreens) offer the advantage of a clear line-of-sight, but can they also offer sonic advantages in the studio?Photo: Clive Wilson / Drumscreens.co.ukThe main pitfall is that you may end up with nasty comb-filtering artifacts on any mics that are within a couple of feet of the screen itself — listen for that characteristic hollow, metallic timbre. If you’re not sure what I mean here, there’s an example in the audio resources accompanying January 2015’s Session Notes column (http://sosm.ag/sessionnotes-BHLH), specifically the BucketBaffle04 file.

Dealing with this is usually just a case of ‘suck it and see’. Solo each mic to check for tell-tale timbral pecularities, repositioning as necessary. In this context, coincident or near-coincident stereo pairs over the kit may offer an advantage over more common spaced-pair rock-miking techniques, as they allow you to place the mics over the centre of the kit, rather than close to the screen(s). You might also consider using boundary mics mounted on the screen itself instead, as these are able to side-step the comb-filtering problem by virtue of their design.

Mind you, my experience is that most project-studio ensemble-recording sessions suffer from too much reflection from hard surfaces in the recording room, rather than too little. As such, I typically find much more call for absorptive screens and blankets/duvets than reflective panels when recording bands in budget-conscious situations. As far as isolation is concerned, the problem with a Perspex screen in a small room is that it doesn’t take much energy out of the room, so unless you create some kind of close-fitting Perspex booth around the drummer (rarely a practical proposition!) you’re not going to make that much difference to the spill levels — in fact, you’ll delay the spill more, which often makes it sound more washy in the mix. With using absorbers, on the other hand, you effectively end up deadening the room as a whole to some extent, so even though they may not obstruct direct sound paths as effectively, the results are likely to be more mixable because the spill will probably be less delayed and have a shorter decay tail.

I most often use reflective panels in ensemble sessions for monitoring purposes, not for isolation, bouncing a player’s instrument sound back at their own ears so that they can better hear what they’re doing without resorting to headphone foldback. This situation seldom arises with drums, as they’re usually the loudest thing in the room as it is so there’s no trouble with anyone hearing them!