Q. Are there any current alternatives to the Roland VS-series multitrackers?

I have been trying to upgrade my Roland VS1680 hard-disk multitracker, as it has no CD burner. I have seen the Korg D3200 and the Tascam 2488, but both seem a bit like toys compared to my old VS1680. The VS series has been discontinued now, so I've also considered buying a second-hand VS2480CD, but I haven't had much luck on eBay.

Are there any stand-alone machines that could compete with my Roland?

SOS contributor Tom Flint replies: Unfortunately, the number of products at the top end of the digital multitracker market has significantly declined in recent years, so the options are not numerous. It seems that the majority of people who are really serious about recording are using software, so it is just too risky for some of the big names to carry on investing their resources in developing products of that nature. Instead, they have concentrated on the larger mid-to-low end of the market, producing perfectly decent products, but ones that are more suitable for domestic and semi-pro use.

Both the products that you mention — Korg's D3200 and the Tascam 2488 — offer high track-counts and each excel in certain areas but, although far from being toys, neither has true professional interfacing or mixing facilities. 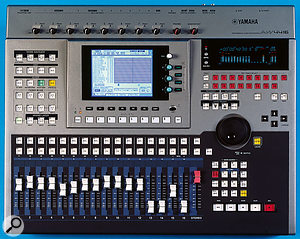 The venerable AW4416 proved to be popular, and was regarded as the best in its class by some, due to its powerful routing structure, which was derived from Yamaha's 0-series mixers. Roland's VS2480CD is the most logical VS1680 upgrade and certainly qualifies as a pro-oriented product. It improves on the 1680 in many areas, such as having 56-bit internal processing instead of 24-bit, and some better channel-processing facilities. The EQ, for example, has an extra band and can be automated, and each channel has dynamics-processing functions. It's also possible to install an 80GB hard drive into the 2480, so there is less necessity to use quality-reducing data-compression modes. The old-style 24-bit VS8F2 effect expansion boards can still be used, but so can the 56-bit VS8F3s, and there are four stereo effects slots available. It's even possible to attach a meter bridge and VGA monitor (as shown in the picture, above).

On the down side, the technology is getting a little long in the tooth and Roland do not seem intent on making a replacement model. Nevertheless, there is a big and well-established VS user community providing forums and support, so the fact that the VS products are no longer manufactured is perhaps not too much of an issue. The 2480 also spawned the VS2400CD and VS2000CD, both of which are worth considering, particularly as the latter benefited from USB connectivity and a few more years of product refinement.

If the only reason for the upgrade is to obtain some improved features and a CD-R drive, sticking to a familiar range is understandable, but using products from other manufacturers is one way a budding producer can expand their engineering experience, so it's worth considering the alternatives. As explained already, the top end of the market has been dormant lately, so many of the competing products are of a similar age. 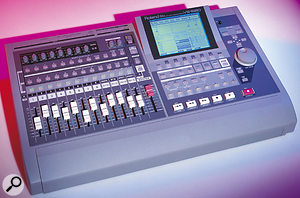 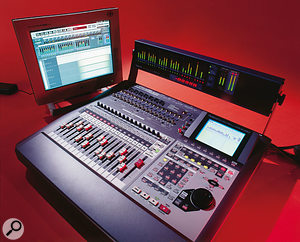 Roland's VS1680 (top) was a champion of its time but lacks some of the facilities, such as a CD burner, that are standard features on more current products. The VS2480CD (bottom), released three years after the VS1680, brought with it an impressive array of tools, plus the option to fit a meter bridge and plug in a VGA monitor. Of course, as the product name suggests, a CD burner came as standard.Yamaha's AW4416 (left) is a professional machine and has been well supported by third-party companies including Waves, who bundled some of their widely respected effects and processing algorithms onto the ADAT I/O-enabled Y56K and Y96K cards for installation into one of the AW's expansion slots. On that subject, any of Yamaha's standard mixer-expansion boards can be fitted or swapped to expand the I/O. Although it only offers 16 tracks, the AW4416's track count is not reduced in 24-bit mode, as is the case with the VS2480 and other models, and it has enough faders to manually mix all tracks at once.

The big attraction of the AW4416 is that it incorporates the guts of Yamaha's industry-standard 0-series digital mixers, arguably giving it better routing and processing than any other multitracker. Dynamics processing is always available on every channel, for example, and it was the first in its class to have moving-fader automation. There are also some other unexpected features, such as the in-built pad sampler, on-board metering and word-clock input and output.

The AW4416 was replaced a couple of years ago by the AW2400, which has longer faders, some improved routing options, good USB 2.0 facilities and an additional EQ algorithm derived from the second generation of 0-series mixers, plus improved A-D converters, preamps and effects. Frustratingly, however, Yamaha missed off some of the things that made the 4416 so good, as well as some of the more professional features, such as word-clock I/O. The newer AW has moving faders, but the tracks are split between two layers and there is no layer for the channel effect sends, meaning that automating the sends has to be done using the far less user-friendly method of turning on-screen knobs. Not all of the mixer routing changes are improvements, and some of the mixing tricks that were possible on the AW4416 can't be done on the AW2400. Furthermore, the later model has just one expansion slot, which is integrated in such a way that it limits the applications of an installed Waves card. But, perhaps worst of all, 24-bit mode reduces the track count from 24 to 12. In short, Yamaha's AW2400 is still a step up from Roland's VS1680 in almost every way, but it is not quite as impressive as an expanded Roland VS2480.

Korg's offering is the D32XD 32-track, which is very powerful in many areas. Once again, the track count is halved in 24-bit mode, as is the number of tracks that can be simultaneously recorded. The mixer seems a little more basic than Yamaha's design but Korg offer some great input options. Apart from the eight on-board analogue compressors, there is the option of installing Korg's own TPB2 stereo valve preamp/compressor, giving it an unmatched input armoury. It also has touch-sensitive moving faders. 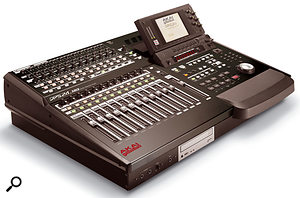 The Akai DPS24 MkII is a solid all-rounder in today's market. It benefits from USB connectivity, touch-sensitive moving faders and 24-bit operation at the full track count.Akai's DPS24 is also an extremely well-specified machine. The product was a long time in development, but just as it was hitting the shops, co-developers Akai UK folded. After that, support on this side of the pond dried up, but in the US it has fared better, reached version two and still seems to be on sale! Unlike much of the competition, Akai's flagship is a true 24-bit, 24-track machine benefiting from USB connectivity and word-clock I/O. It also has touch-sensitive moving faders (like the Korg D32XD) and high-quality preamps. Whilst developing the DPS24, Akai's key concern was to design something that could carry on running while certain editing and processing tasks were being performed. That is the area where it is most impressive, and the functionality highlights one of the AW4416's shortcomings quite distinctly. If the DPS24 has any weakness, it is that it doesn't have quite the effects-processing power of Roland's machine when the latter is stacked with effects boards, or the mastering capabilities of the Yamaha AW when fitted with a Y56K board, although the way the DPS24's mixer is designed makes it possible to use I/O in the expansion slots to process via outboard.

Tascam's SX1LE competes with the DPS24 MkII and is another product that still seems to be in production. It is reasonably affordable and offers 16 tracks, but its biggest strengths are its expandability and professional interfacing. SOS doesn't seem to have reviewed this one, so it's worth taking a look at the PDF you can find here: www.tascam.com/products/SX-1LE/SX1LE_AppGuide.pdf.

Unfortunately, most (if not all) of the high-end digital multitrackers mentioned above were designed before USB 2.0 took off, so even where it has been added, it is not implemented as well as modern technology allows. Nevertheless, if the product has enough expansion slots then it should be possible to port just about anything into a computer for editing and making backups, and all those mentioned ship with CD-R/W drives.

If I had a few grand to spend today, I personally would probably go for the Akai DPS24 MkII, as it seems to be the best all-rounder but, as is usually the situation, there is no absolutely clear-cut case for picking one above the rest.