In SOS December 2008, you explained how USB and Firewire cables could complete ground loops and result in audio problems. Is the same true of digital audio cables? 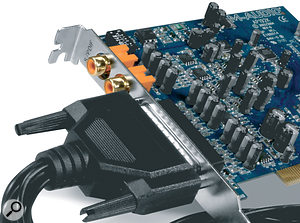 M-Audio's Audiophile 192 is an example of a soundcard with well‑designed S/PDIF sockets. Their metalwork is insulated from the PCI backplate, and the small black component immediately above them on the circuit board is the pulse transformer for the output, which prevents ground loops.

SOS columnist Martin Walker replies: In theory, most digital connection formats incorporate safeguards to prevent ground loops. Unfortunately, in practice such problems do occasionally occur, either due to incorrectly wired cables or to shortcuts taken by the manufacturer of the gear in question. The tiny ground‑loop signals are rarely sufficient to result in corruption of the digital data itself, since that either gets through or it doesn't. However, if a digital audio connection completes a ground loop, it may indeed result in characteristic hums, digital whistles and whines appearing in your analogue audio signals. Here's a quick run‑down of possible problems you might experience, plus some ways to avoid them. Let's look at the easiest options first.

ADAT and S/PDIF optical both use fibre‑optic cables, giving true galvanic isolation, just like a transformer, so they can never result in ground loops. MIDI inputs also incorporate opto‑isolators, so plugging in a MIDI cable should never result in a ground loop. A few MIDI In ports (mostly on budget PC joystick/MIDI adaptors) may omit this circuitry, to save a few pennies, but the most common cause of MIDI ground loops is using an incorrectly wired cable. Avoid five‑pin DIN hi‑fi cables and use proper MIDI cables, which use only pins four and five for data transfer, and connect the cable screen to pin two only at each end of the cable, but not to the metal shell of the plugs themselves. If a multimeter shows zero resistance between the metal shell of the plugs at each end of a MIDI cable, discard it.

AES/EBU normally uses balanced connections with transformer isolation (signal 'pulse' transformers are used, which are the tiny black boxes you can often see on soundcards near their digital I/O sockets). It's very rare to run into AES/EBU ground‑loop problems, since these sockets generally appear on professional gear where no corners are cut.

The most problematic digital connections tend to be S/PDIF coaxial (phono) ones, which, although unbalanced, should, in theory, have transformer‑coupled outputs just like AES/EBU ones, so that when you connect them to an S/PDIF input no ground loop is created. Unfortunately, this is an area where corners get cut on budget audio interfaces, and if your S/PDIF phono sockets are bolted direct to the metalwork, no transformer has been used.

It's not wise to attempt removing the screen connection at one end of an S/PDIF cable, since this can cause signal degradation and data errors. If you suspect a coaxial S/PDIF connection is causing your problem, switch to Toslink optical, if both pieces of gear offer this option. M‑Audio's CO2 (around $60) is also a handy gadget to have, as it converts between coaxial and optical S/PDIF, and also features transformer‑isolated phono sockets so you can use it in‑line to cure ground loops.

Finally, it pays to be extremely systematic when tracking down digital ground loops, as I found recently. My studio developed annoyingly intermittent digital noises that disappeared as soon as I disconnected an S/PDIF lead between my audio interface and D/A converter. However, this connection wasn't, in fact, to blame. I had two half‑rack‑width devices bolted into a rackmount tray, and had scrupulously made sure neither of them touched the metalwork of the tray or each other. Unfortunately, the bolt heads used to secure them to the tray had eventually worked their way through the paintwork on the top panel of the rackmount device beneath, which then completed the circle of this particular ground loop. On this occasion, some nylon bolts cured the problem!