Q. Can 'Green Glue' help me improve my garage-studio? Skip to main content

Q. Can 'Green Glue' help me improve my garage-studio? 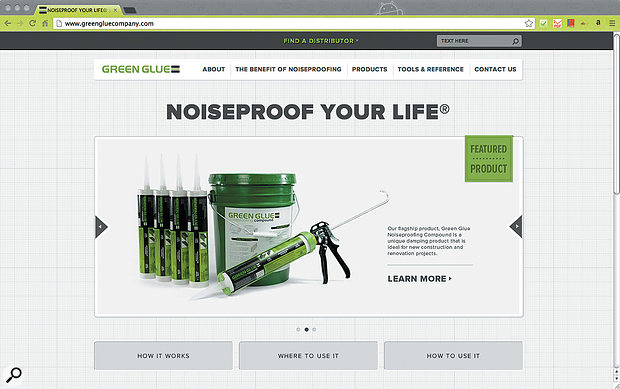 Green Glue does do the acoustic damping job its manufacturer's claim, and their web site offers plenty of practical advice on how to use it to best effect in your DIY studio builds.

As I've been researching how to convert my garage into a studio, I keep seeing mentions of something called Green Glue, which is supposed to reduce noise leakage somehow. Not trusting the marketing blurb, I wanted to know: does this stuff actually work, and if so what is it doing?

SOS Editor In Chief Paul White replies: Green Glue is a specially formulated, water-based adhesive that, unlike most types of 'squeeze on' adhesive, remains flexible once set, helping it provide both damping and improved acoustic isolation when used to bond two surfaces together. Described by its manufacturers, the Saint-Gobain Corporation, as 'viscoelastic', Green Glue is applied using a standard mastic gun and can be used, for example, between layers of plasterboard (drywall) or in the construction of floating floors, where its damping factor is some 20-times greater than for rigid adhesives.

When using this glue to enhance the isolation properties of a structure, it's best not to 'short circuit' the glue by also screwing the two pieces together, though if you have to do so for mechanical reasons, the damping properties of the glue should not be too compromised. One tube can cover around 16 square feet at full coverage and remains workable for around 30 minutes. However, you don't have to cover the full surface area with glue for it to work — most people squeeze it on in a zig-zag pattern and also go around the board close to the edges. The glue then sets over a time
that's dictated by the conditions (temperature and exposure to air), achieving a full cure in around a week. It costs a little more than standard board adhesive but the improvement in performance is very worthwhile.

SOS Technical Editor Hugh Robjohns adds: Just to elaborate on what Paul's already said, the idea when using it in studio wall construction is that as sound waves strike the wall's front surface it moves slightly in response, and so the front drywall layer moves fractionally relative to the rear drywall layer. The Green Glue between them not only allows that movement to happen, but also converts that movement energy (in the form of mechanical shearing forces), into heat. So it acts to damp the wall vibrations and thus reduce the onward transmission of sound.

However, Green Glue isn't magic and, on its own, it won't provide a complete or perfect solution. It has to be used intelligently as part of a careful overall acoustic design of the whole room, taking into account the wall and ceiling constructions, and dealing with issues like 'flanking sound' and the efficiency of the door and window seals. The amount of noise isolation that can be obtained is limited by the weakest link in the design, and it's very easy to introduce design errors that undo all the good intentions! The Green Glue web site www.greengluecompany.com offers some helpful — and trustworthy! — advice on using the company's products, and constructing studio walls correctly, but if in doubt I'd strongly recommend consulting an experienced studio acoustics designer to avoid wasting a lot of money and effort by doing things the wrong way!

What Do Mastering Engineers Actually Do?
3 days 12 hours ago.