Q. Can I use one Roland MC80 sequencer to replace two MC50s? Skip to main content

Q. Can I use one Roland MC80 sequencer to replace two MC50s? 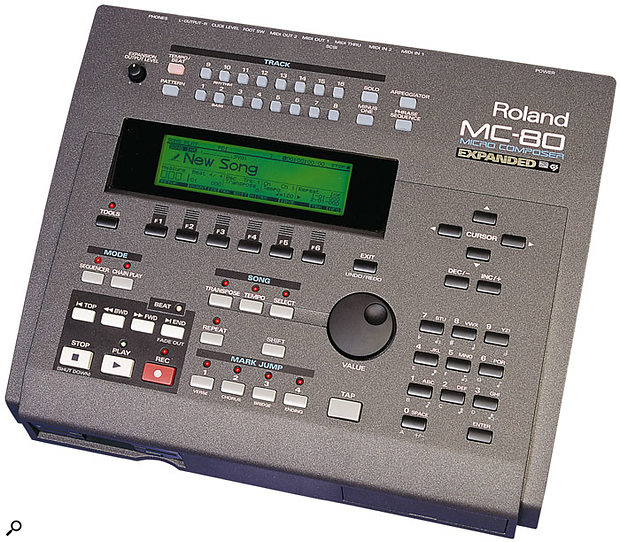 Unlike the MC50, Roland's MC80 Micro Composer can stream songs directly from disk without having to load them into memory first.

I want to replace our band's two Roland MC50 sequencers with the MC80. It seems to supersede the MC50 in every way, especially with the Zip drive installed. At the moment I run two MC50s together so that I can load songs on one while the other is playing, thereby avoiding pauses. Being able to start a song the instant a previous one finishes is highly desirable in a club gig situation where we want to run a whole set of songs without a break. I like to be able to load at least 10 to 12 songs at once.

I read that although the MC80 only holds one song at a time in memory, it can play back multiple songs directly from the disk drive, but I was wondering if there was a significant pause time between songs when playing directly from disk?

One of the other reasons for getting an MC80 with a Zip drive is to cut down on floppy disk usage. When you have masters and backups of every floppy disk the numbers start building up really fast. We also want to cut down on leads and hardware by using one sequencer instead of two, and are hoping that a more modern sequencer with more features will encourage us to do things like loop sections on the fly and so on. Will the MC80 do all this as well as be able to play back songs with little or no pause between songs?

SOS contributors Tom Flint and Colin Williams reply: Just as on the MC50, a song has to be loaded into the internal memory of the MC80 before it can be edited; however, the MC80 has a playback-only mode, called Disk Quick Play, which streams songs directly from disk. In this mode, it is possible to scroll through a song menu and press play when you see the one you want, without having to load it into memory. What's more, another song can be cued up ready while that one is playing. The sequencer also offers something called Chain Play, which uses the same streaming process but works on a predefined list of tracks, enabling you to arrange an entire gig's worth of material beforehand.

It's worth noting that the MC50 already has a Chain Play type feature that eliminates the loading delay between songs. Chaining is done via the MC50's performance mode, called Super MRP, which is accessed by turning on the power while holding down Numeric Key 2. MRP is a playlist for songs, enabling a programmer to arrange a group of songs into a performance. Unfortunately, the feature is limited by the internal memory of the MC50 because the songs have to be loaded before they can be played, so that even though it is theoretically possible to have total of 99 song files in an arrangement, in reality, there is only room for a few to be loaded at one time. Songs are sub-grouped into what Roland call 'Banks', of which a performance can contain 26 ordered from A to Z.

When a bank is loaded, it will automatically play all its songs in the specified order, responding to any interval times, count in marks and loop points entered by the programmer. At the end of the sequence, the next bank has to be loaded, and this takes a finite amount of time.

This is how the display should look in Quick Play mode.

When we used the MC50 for our gigs, we managed to cram a maximum of just four songs in each Bank, each of about four to five minutes in length. Although that wasn't enough for a whole set, it did give us up to about 20 minutes of playing time until there was a break while the next Bank loaded itself. The time taken to load a large bank was about 30 seconds (or less for fewer songs), but the blank measure or two we inserted at the start of each song to hold its SysEx data added a few more seconds. Having just a couple of gaps in a set was not really a problem though, as we knew where they were, and could therefore use them as an opportunity to enter into a little crowd banter and tell the audience of up and coming gigs. We also controlled the start of the new Bank with a footswitch so that we wouldn't be caught unawares by it automatically starting itself after loading. We certainly never felt that it was necessary to run two MC50s just to remove a couple of brief breaks in the set.

Song Chain is the MC80's version of MRP, but because it pulls songs directly from disk, the size of the storage medium is the only limitation to the number of songs that can be chained together into a performance. As far as disks are concerned, there are a few options. A Zip100 or 2.5-inch IDE hard drive can be installed into the chassis itself, and an external SCSI Zip device can be connected via an optional interface. Whichever device you install, it should be possible to play a huge number of songs back in one go, bearing in mind the capacity of a Zip or IDE drive relative to the MC50's internal memory.

It's also worth noting that the MC80 has a dedicated Chain Play button, which reflects Roland's efforts to make the whole set compilation process far easier than it was on the MC50.

The MC80 is able to play MC50-format files that are loaded into memory. However, Disk Quick Play is only possible for files in MC80 format, so any old song material will need to be converted, and new playlists created. It's worth bearing in mind that an MC80 file cannot be converted back into MC50 format, so upgrading is a one-way deal.

We tried converting a couple of our large songs from MC50 format, and found that they still flowed from one to another without any noticeable gap. In that respect, Chain Play responds just as MRP did on the MC50. 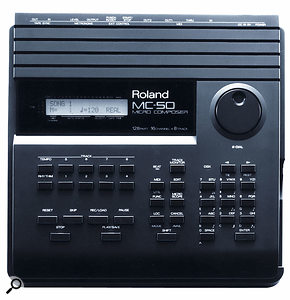 MC50-format files are fully compatible with the MC80.

There are a few differences between MC80 and MC50 which could be important to you. Firstly, the MC80 comes with the internal VE-GS Pro Voice sound module (based on the SC88 Pro Sound Canvas) which could be an opportunity for you to cut down on hardware and cables even further if you can use it to replace some of your other sound sources.

When it comes to looping segments of a song on the fly, as you wish to do, the MC80 only slightly improves on the MC50's loop facility. In the MC50's Super MRP mode, any segment of a song specified for Block Repeat is automatically looped until the instruction is defeated by pressing a remote footswitch. The MC80 adds an option for specifying a set number of repeats, as well as a dedicated Repeat button for triggering or cancelling a loop; however, it is still necessary to select the block of measures beforehand.

The MC80 also has a set of performance buttons labelled Verse, Chorus, Break and Ending, which make it possible to rearrange a song in real time. Unfortunately, they only work for songs that are loaded into memory, and therefore cannot be used in Quick or Chain Play mode!

Sadly, for some MC50 owners, the MC80 is missing one of its predecessor's best features — namely the Rhythm Track loop-pattern sequencer, which effectively acted like a drum machine when used to control percussion sounds on external modules. The MC80 has no dedicated rhythm track or drum grid. On conversion of MC50 disks the rhythm track defaults automatically to track 10. It is still possible to set up a very accurate quantise grid for a rhythm performance, but editing is done in Microscope mode, just like any other track. The MC80 method provides more resolution for parameters like volume, timing and expression, but it's not as intuitive as the old Rhythm Track.

As for cutting down on floppies, you'll certainly be able to fit more songs on a Zip disk, but because you stand to lose more material if a Zip gets corrupted, you'll still need to make lots of backups!

The MC80's Disk Quick Play and Chain Play should solve your problems given your current requirements. Whether the MC80 is the most sensible upgrade depends upon how you create your sequencer files. For example, the MC50 MkII saved its data in standard MIDI file format (the basic MC50 could be upgraded to use MIDI files rather than its proprietary format too) so it is possible to arrange sequences using software, and then import them into a MkII for live play. If you do indeed compose in software, and only use the MC50s as live playback devices, then perhaps a MIDI file player would make a better playback option. If, on the other hand, you are a lover of hardware, and don't use the rhythm part of the MC50, then you have nothing to lose from upgrading to the MC80.