I have just started playing mandolin in a live band, and we're currently touring the UK. However, although my mandolin is an electro-acoustic model, when it's plugged straight into the PA system using a jack-to-jack cable, it's not loud enough and needs a significant boost in volume. Does this mean I need a DI box? And if so, what type do I need? 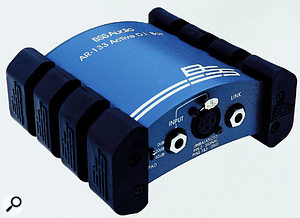 Technical Editor Hugh Robjohns replies: Yes, I think a DI box would almost certainly help in this situation. In most cases, the input jack socket on a PA console expects a line-level signal, whereas the output from your mandolin will be closer to a microphone-level signal. So using a straight jack-to-jack lead would account for the lack of volume you have found. A DI box accepts the signal from your instrument and converts it into something that looks more like a microphone signal, so it can then be plugged into the desk's mic input and amplified by its mic preamp in the usual way, which is far more flexible. 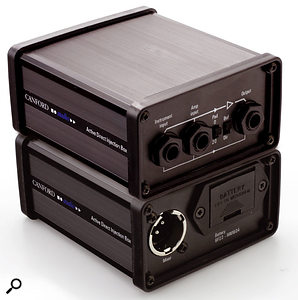 It's worth spending money on a quality DI box like the BSS AR133 (above) or Canford's Active DI Box (shown here). If used properly, these will typically last around 20 years.

Fundamentally, there are two types of DI box: passive and active. In general, I would recommend a good active box, as these are much more versatile, and I would suggest spending a reasonable amount of money too, since it will last you for 20 years or more. My two favourites are the Canford Audio Active DI Box (www.canford.co.uk product code 20-041) and the BSS (www.bss.co.uk) AR133 active DI box. They both cost close to £100, which seems reasonable, given their likely life-span.

There are, of course, many far cheaper active DI boxes around, some from as little as about £20. Some even look remarkably similar to the boxes I've mentioned. However, these often have inferior transformers that curtail the low-frequency response, and noisier electronic circuitry, and I consider them to be a poor return on the investment.

Active boxes obviously need power, and most can be run either from an internal PP3 battery or phantom power from the desk. I prefer to run mine from the desk, since this lets me avoid having to check and replace the batteries, but it's nice to have the option for the few occasions when phantom isn't available.

To connect the DI box, you simply plug your jack-to-jack cable between the mandolin and the instrument input on the front of the DI box. The XLR output on the back is connected to the PA console via a standard XLR-to-XLR cable, and you can either arrange to provide phantom power from the console or install a suitable battery to power the DI box.