Q. Do I really need to replace my windows to reduce noise? Skip to main content

Q. Do I really need to replace my windows to reduce noise?

Having just purchased my first house, I've found myself living on a busier road than I would have liked. My studio is at the front of the house and there is a reasonable amount of sound coming in through the old double‑glazing. I expect the windows are at least 15 years old and they have trickle vents at the top, which obviously mean a small portion of the frame is always 'open'. I've replaced all the hinges to get them to shut up tight, but it's still a bit too noisy for me. 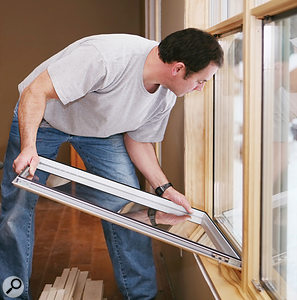 Rather than fitting special 'acoustic' glass, it will be cheaper — and probably more effective — to add secondary glazing to your existing windows.I've had a pretty expensive quote to get new glass in the front of the house and, from what I've read, having different depths of glass on either side of the sealed unit can help. This is 'acoustic' glass and is 10mm on one side and 6mm on the other, which seems quite high spec, as other companies offer 6mm x 4mm. The overall unit depth is 28mm. Their claim is that this will give, on average, 39dB of sound reduction.

Should I try to purchase a cheap dB-measuring device. or can I cobble something together with a decent mic and a laptop? I want to see how much reduction I have at the moment, to try and figure out if the investment is worthwhile. Also, do you have any experience with these 'acoustic glass' products? From what I know about glazing, the logic behind the design holds up. However, these windows are approximately two and a half times as expensive as a run‑of‑the‑mill window. 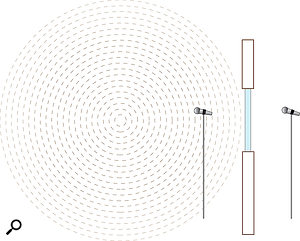 Once you've matched the sensitivity of two microphones, you can use them to measure how much attenuation a window is providing.

SOS Technical Editor Hugh Robjohns replies: The trickle vents (if left open, or if they have poor seals) will always be the downfall, regardless of how well specified, designed and installed the rest of the windows are. Unfortunately, planning regulations may require you to retain the trickle vents, depending on the age and design of the building, so it's worth asking that question of your window installer.

As for measuring the current level of attenuation, the easiest way would be with a simple sound-pressure level meter, the kind that costs around £16 from the likes of Amazon. Set it to slow response, A‑weighted, and obtain readings from about a metre in front of the window outside, and again from inside. The difference will give a reasonable idea of the attenuation provided by the window. This kind of simple meter is also excellent for setting up monitoring systems.

Alternatively, if you have two similar mics, a couple of very long cables, two preamp channels and a DAW of some sort, you could do the same thing with those. I'd start by placing one mic outside the window, facing the road and adjusting the preamp gain to get a sensible recording level you can then use to calibrate the sensitivity of the second mic.

Once you've established a reasonable recording level, bring that mic back indoors, stick it in front of a speaker that is producing a constant level tone of some kind and place the second mic alongside it. Adjust the gain of the second preamp, to match the signal level of the second microphone to that of the first. A really quick and easy way of doing this is to sum the two mics to mono and put a polarity inversion in the second mic. When the mic sensitivities are matched, the two signals will almost perfectly cancel each other out, so simply adjust the second preamp's gain for the deepest 'null'. Next, remove the polarity inversion and mono sum, take the first mic back outdoors and place it in front of the window looking at the road again. Set the second mic up inside the room looking at the window and record a few minutes of traffic noise with both mics.

All you need to do now is compare the average levels of the two recorded tracks to find out what level of attenuation the window is currently providing. The DAW meters will provide the information you need if you leave the peak hold indicators on. It might also be educational to close off and seal the trickle vents with gaffer tape to see what difference they make to the figures.

Assuming that the existing windows are in good condition, I suspect that replacing them with new ones — even the higher attenuation ones — won't make that much difference. Secondary internal glazing, adding a third layer to the window sandwich, is likely to be far more effective, but perhaps not as attractive and maybe not as convenient. You'd need something like a 10dB improvement just to make the ambient noise sound half as loud, and that's extremely difficult to achieve with normal domestic window designs.