Q. Does the centre of an image suffer with the ORTF recording technique? Skip to main content

Q. Does the centre of an image suffer with the ORTF recording technique? 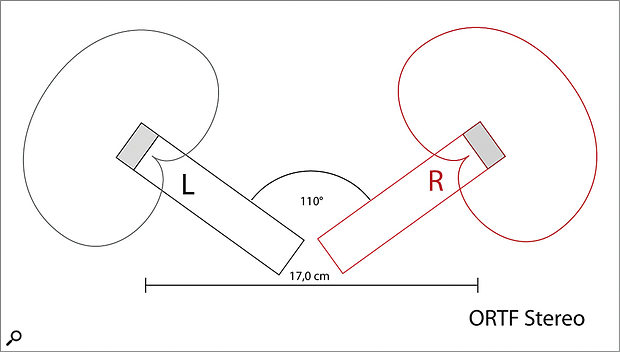 I keep reading in your mic reviews about the sound being more natural when hitting a mic on-axis. Does this mean that there’s a risk of coloration with the ORTF technique right in the centre of the stereo image? (And are there any other problems I should know about when using this technique?)

SOS Technical Editor Hugh Robjohns replies: The short answers are no, no and no, in that order. The ORTF technique was developed in France in the early 1960s by the Office de Radiodiffusion Télévision Française (which later became Radio France). It employs a pair of cardioid microphones mounted at a mutual angle of 110 degrees, and with their capsules spaced by 170mm. In this way sources placed around the microphone array are captured with both level differences between the two channels (like a conventional coincident array), and timing differences (like a spaced array). Not surprisingly, then, the ORTF system combines some of the imaging precision of an X/Y array with some of the more naturalistic and spacious sound of a spaced A/B array, and many recording engineers feel this offers the best of all worlds.

The capsule spacing is very modest in comparison to most spaced mic arrays, and so the inter-channel timing differences are small and certainly not enough to generate the ‘hole in the middle’ that can afflict larger spaced arrays. Neither is it sufficient to cause comb-filtering problems in summed mono. Similarly, the microphone mutual angle is slightly greater than common coincident arrays, but again not sufficient to cause significantly worse off-axis problems. However, small-diaphragm microphones are strongly recommended for this configuration, because their off-axis response tends to be far more uniform than that of large-diaphragm mics.

It should be remembered that the ORTF array is intended for large-scale sources such as orchestras and choirs, where the aim is to capture the entire ensemble with a natural balance and perspective. With a stereo recording angle of 96 degrees (only fractionally wider than a Blumlein array of crossed figure-8 mics) the ORTF rig must be placed quite a long way back from the source, and so centre focus is rarely an issue, given the relatively distant perspective anyway. Usefully, the cardioid-pattern mics provide less ambient pickup than a Blumlein array at a similar distance from the source. I like and use the ORTF format a lot, using Sennheiser MKH40 or Neumann KM184 microphones, and have never had any concerns about coloration of the centre image.