Q. Have I broken my monitors? Skip to main content

Q. Have I broken my monitors?

My left monitor appears to be buzzing somewhere in the high/mid-frequency range. When I pan the same material to the right speaker, the buzz isn't there. The trouble is that the left speaker sounds fine, as far as I can tell, except for this buzzing anywhere around that frequency.

I did accidentally send something horribly loud and abrasive through them last week (and they are 12 years old!), so I fear I may have ruined one. Do you have any advice as to how to test for damage? I've sent a test sine-sweep through and it's not doing anything at low levels, but I risk deafening myself going louder.

SOS Technical Editor Hugh Robjohns replies: It does sound as though you may have partially fried the voice coil of your left speaker, I'm afraid. However, there are a few less‑terminal possibilities that would still be worth checking.

First, try swapping the input to the left speaker with the right, just in case it's something upstream that is causing the problem (like a faulty left output from your mixer, monitoring controller, interface or power amp).

Next, it would also be worthwhile checking that all the screws and bolts holding the speakers and the rear connection panel into the cabinet are tight. If one or more of these work loose (and they do tend to loosen over time), that could be the cause of your resonant buzz or rattle. You need to be careful tightening the screws if they are into wood; you don't want to strip the threads! 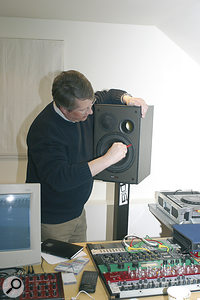 Before concluding that a monitor has a fried voice coil, check that its screws and wires are secure, as loose ones might be causing the rattle or buzz.

Another possibility is that an internal connection wire or, perhaps, some of the wadding may be resting against the inside of the bass driver cone, so remove the bass driver carefully and have a peek inside to check for that too.

If you still draw a blank after checking these things, it's probably a burned voice coil. Testing with a sine-wave sweep is as good a way as any to identify nasty distortion, but you may well find that the problem only manifests above a certain volume level.

You could also try gently pushing the bass cone in and out and listening carefully for a scraping or grating sound: that's the melted coil‑wire insulation scraping in the magnetic gap and that means it's time for some new bass drivers. I'd recommend changing the bass drivers in both speakers (if you can still get replacement bassdrivers). If you only do one, it won't match the sonics of the old and well‑used one!