Q. How best do I make use of diffusers when recording? Skip to main content

Q. How best do I make use of diffusers when recording?

If I have a live room with diffusion on one wall what is the best way to orient a player (eg. a violinist) and room mics in order to achieve the best effect from the diffusers? Should I have the mic facing the performer, with their back to the diffusers? I know that diffusers need a certain distance to work, which is why I'm guessing that I should put the mics as far as possible from the diffusers but this means that the player would have to be right in front of them and I'm not sure if this is good or bad. Is there a better orientation? Putting the mics or performer in the middle isn't really an option since it is a fairly small room and so it wouldn't be a room mic anymore, more of a close mic. 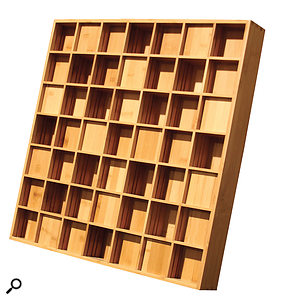 Where should you position a performer if you have diffusers (such as this Auralex WavePrism panel) in a recording space?

SOS Editor In Chief Paul White replies: I wonder if the diffusers in question are something of a red herring! A diffuser's job is to help randomise reflected sound and hence reduce room coloration of the type that occurs when sound bounces around in a plain rectangular space with flat walls. As reflected sound behaves in the same way as reverb — in that it is essentially a similar level in all parts of the room — it shouldn't matter whether the player is fairly close to the diffusers or not.

Your job is to get the best sound you can from that room so if you get a good sound working with the artist close to the diffusers then that's fine. Just experiment and see what works best in that space. Avoid working too close to walls, though, as the bass build-up caused by the boundary effect can cause problems. (That said, in the case of the violin a low-cut filter should take care of any such issues because violins don't produce very low frequencies.) More important is having enough space above the instrument to position the mic, which should also not be positioned too close to walls or the ceiling. If the room isn't high enough, then the recording may sound better with the player seated. As with the electric guitar, a reflective floor surface, such as a piece of hardboard or MDF, under the playing position may add a little more life to the sound.