Q. How can I improve a school's live room? Skip to main content

Q. How can I improve a school's live room?

We don't have the best‑sounding live room, so I try to achieve as clean a sound as possible. To this end, drums are normally situated in the centre of the room, and there are curtains behind and to the right of them. Would we have any more success if we moved the drums so that the drummer is backed into the corner of the curtains? The room is small and pretty much untreated, save the curtains. Needless to say, all the walls are hard and smooth (school building budget). So I guess I have two questions: firstly, where in this room would be the best starting point for the drums; and secondly, how would it be best to treat this room? It can be quite ringy, but the second curtain has tamed some of that.

SOS contributor Mike Senior replies: In typical school recording rooms there can be a variety of acoustic problems related to recording drum kits, but two main things tend to cause most problems. The first of these is resonances created by standing waves between the parallel room boundaries, and you've already probably dealt with one of these resonances using your curtains (the ringing you mention was probably due to high‑frequency resonances). However, the more problematic resonances to deal with in a small, untreated room are the low‑frequency ones, and they can cause the recorded low‑frequency response to vary in a severe and apparently unpredictable manner as you move instruments and mics around the room. How the drums interact with the room will depend on where they are placed, but it's probably safe to say that the exact centre of any of the room dimensions is an unwise choice for either bass drum or floor tom, because these locations tend to suffer worse from the deleterious effects of the room resonances.

On the other hand, it's also not necessarily a good idea to put either of those instruments right up against the wall, as that'll give you a potentially unnatural‑sounding acoustic boost at the low end as a result of proximity to the room boundary. This still leaves a lot of placement options, though, so don't be afraid to spend a little time moving the kit around to find a good spot, because once you find a position for the drums that minimises the negative impact of the resonances, any other acoustic problems tend to be easier to sort out in other ways. One practical tip that Mike Stavrou mentions in his book, Mixing With Your Mind, is to get a drummer to carry a floor tom around the room, hitting it while you listen. It's a surprisingly revealing exercise.

The other main group of problems you'll be getting are as a result of strong boundary reflections, especially at the high end, given that the walls and ceiling are hard and smooth. These will manifest themselves as an overly reverberant sound (usually with an undesirable, boxy character) and an unusual recorded tonality on some of the mics, because of the interference between direct and reflected sounds. You'll have taken some of the edge off this problem at the very high end with your curtains, but I'd avoid covering all the walls in this way if possible, as it'll actually start to soak up too much energy in only that one frequency range.

The main things I'd concentrate on controlling are the cymbals, which will tend to come across too loud because of the reflections (a problem not helped by student drummers frequently hitting the cymbals and/or hi‑hat too hard). If you can get hold of some proper four‑inch‑thick acoustic foam from Studiospares, try putting a metre‑square patch on the wall closest to the hi‑hat (or on two walls, if the hi‑hat ends up roughly equidistant from two), just to take the edge off its reflections: the hi‑hat radiates a lot of sound horizontally. The other cymbals, however, fire most of their sound up and down, so the other tactic I'd suggest would be to apply some foam to the ceiling above the kit. Again, don't plaster the whole ceiling in foam, just try to concentrate on the areas above the cymbals. (If you want to future‑proof the investment in the foam, fix it to plywood backing and hang it on the wall, rather than just sticking it up with adhesive. That way you can move it to different rooms, should the layout change, and you can also adjust its position for other recording tasks.) 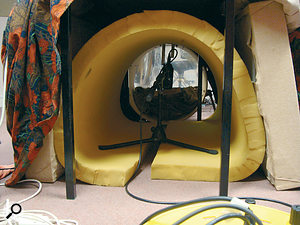 Getting a tight kick sound in a small school studio without much acoustic treatment can be tricky, and one approach is to try to isolate the kick‑drum mic as much as possible from the room. If you want to mic from a little way away from the drum, the best way to achieve this isolation is to build a thick‑walled tunnel out in front of the kick drum and surrounding the mic. Here you can see down one such tunnel Mike put together in a school studio recently, using a small desk as support. At the far end is the kick drum with its resonant head removed.With the best will in the world, you're not going to get a perfect‑sounding room (certainly not within anything like the kind of budget most schools have for music technology), so you'll probably also need to take steps to clean up the recorded drum sound while mixing. If you try to minimise the low‑frequency resonances as much as possible, you should be able to achieve a respectable kick‑drum sound, as long as you can get a fairly dry close‑mic signal and then maybe apply some high‑pass filtering to the low end of the overhead mics. If there's a hole in the kick drum's resonant head, so that you can get a mic inside, getting a dry close‑mic sound should be straightforward, but if you find yourself miking from outside the drum or with the resonant head off, make sure to get busy with some old blankets to try to isolate the mic from the ringing of the room. How many blankets should you use? The more the merrier, as far as I'm concerned, and I'd personally go for a mini‑version of the 'blanket tunnel' I demonstrated in SOS June 2008's big drum‑recording feature, as this enables a slightly more distant miking position that seems, to me, more reliably to achieve a workable general‑purpose kick sound than when you get right inside the drum. Thick blankets will also reduce the amount of kick drum actually making it out into the room, which can help give a tighter sound.