Q. How do I emulate a real drum sound using EZdrummer? 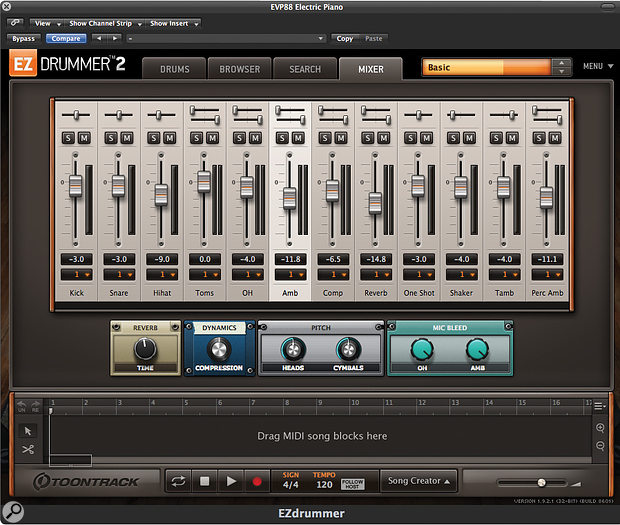 Given the control you have over the performance of MIDI–triggered drum instruments such as EZdrummer 2 (pictured), you may find when it comes to compression that you can focus more on group channels such as room (or ‘ambience’) mics and overheads, and less on the close-miked kit pieces.

I’m currently trying to emulate the drum sound on the recent Lower Than Atlantis song ‘Here We Go’ using EZdrummer, and I have each drum component going to its own channel to be mixed, before sending the kit as a whole to a bus where I then apply reverb. Each component of the kit will have some degree of compression applied to it, so would it then be overkill to add more compression to the kit as a whole on the bus channel? I just find this then helps bring the kit ‘together’, but I’m concerned that it might be a bit fatiguing on the ear or detrimental in some other way. I use Stillwell Audio’s Rocket compressor, because I like my drums to sound like they’re having the crap beaten out of them, and that compressor gives EZdrummer that power and punch.

SOS contributor Mike Senior replies: That song is pretty extravagantly compressed, I grant you, and in a general sense any compression setting is fair game as long as you like the sound of it; there’s no need to second–guess yourself on that count. However, if you’re already working with a MIDI–triggered drum instrument which effectively gives you complete control over the simulated performance, then one of the fundamental roles of compression is rendered redundant, namely its ability to make the performance more even. As such, I’d concentrate more on what compression has to offer in terms of shaping per–hit amplitude envelopes and adding appealing tonal coloration/distortion. In this context, I’d expect to be using more compression on ‘mixed’ channels such as the overheads or room signals (and indeed the whole drum mix) than on individual ‘virtual mic’ channels, because it’s easy to stamp the life out of each drum’s attack if you’re not careful — and you need all the life you can get when you’re working with virtual drums as it is!

I’d also suggest expanding your repertoire of compressor plug–ins. It’s not that I don’t like Rocket — I use it regularly — but it’s very fast, which means that if you rely on it for everything you may lose too much transient definition across the board. It’s also a compressor with a particular tonal character and it may not suit some sounds as well as it does others. If you like the Stillwell plug–ins, then try out Bombardier too, which works especially well for mixed bus signals because of its automatic attack/release time, RMS window, and side–chain contouring options.

Another thing to notice about this Lower Than Atlantis mix, though, is that the amount of drum room sound and/or reverb being used varies a great deal during the song. With that in mind, be careful how you compare your own work–in–progress with this production. If you reference against the verses (where it’s easier to hear the details of the sound) you’ll almost certainly mix too dry, and the temptation may then be to over-compress your own sound to achieve greater sustain during your choruses. Automation is the way to avoid problems here — consider riding up the room–channel and reverb–return faders for the more high–energy moments of the arrangement.