Q. How do I re-image my new Mac from a backup drive? Skip to main content

Q. How do I re-image my new Mac from a backup drive?

In order to back up my Mac, I used a backup utility (Carbon Copy Cloner), in addition to using Time Machine to create incremental backups. The last time I bought a new Mac I simply connected the backup drive and booted from that by holding the Alt (Option) key, choosing the system, backing up, erasing the Mac's hard drive and copying the old system across using CCC. I have just bought a new Mac (a mid-2012 MacBook Pro) and hoped to repeat this process, but my attempt to boot from the backup drive was met with a 'prohibited' warning sign. Why is this, and how can I restore my old system to my new Mac?

SOS contributor Mike Watkinson replies: If your old Mac is heading south and is to be replaced by a brand-new model you may be forced to rethink the way you back up your hard drives. For quite a few years now, like you, I have also relied on the Carbon Copy Cloner utility to create a bootable copy of my system drive. However, I first had an inkling that this may not be the way of things in future when the perennially donationware Carbon Copy Cloner app became a commercial concern (Mr Bombich has to pay his bills as well, I guess, but more likely was that some significant code rewrite was required). 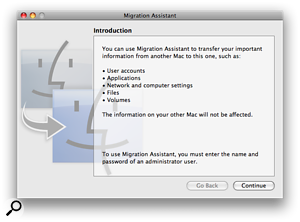 If your new Mac is already set up, Migration Assistant will copy across all applications, libraries, preferences and so on from the backup of your old Mac.

As you suggest, common practice in the past has been to hold down the Option/Alt key and boot the new Mac from the old system on the backup drive. You could then erase or partition the system disk on the new Mac and copy the old system across to the new disk. You could install a few updates, fix the disk permissions, copy the data and carry on as before. However, as you have discovered, this has now changed with Apple's most recent hardware releases. Attempting to boot from the backup drive is now met with the 'prohibited' warning sign that you describe. The reason for this is that the new Mac is looking for code that identifies the build of the machine, and this can happen even if the 'new' Mac has a system version older than the backup you are attempting to install. The best advice I can give to get around this is to follow one of these options:

A fresh installation: Your old Mac might be a total mess of downloaded nonsense (I know mine is!): trials of applications you never use, libraries of samples that might become fashionable again in 20 years, that sort of thing. Rebuilding from scratch would be a great option for you if you have plenty of time, and if you also have a record of everything you need to reinstall (including a record of all your serial codes)!

Use Migration Assistant: In your Mac's Utilities folder is an app called Migration Assistant. You can use this if the new Mac is already set up, and it will copy across all applications, libraries, preferences and so on from the backup of your old Mac. Simply connect the disk and select it when prompted by Migration Assistant. This is relatively painless and works well, but leads to the following issue: If any of the data you need is part of a user account (iPhoto library, iTunes library and Mail accounts, for example) then you need to migrate that user into your new system as well as everything else. This, however, leads to a situation where you end up with multiple users on your new Mac where previously you may only have had one.

Transfer During Setting Up: To avoid this issue, you should transfer the information from your backup drive to your new Mac during the initial setup process, which takes place the first time you switch on your new Mac. When you get to the 'Transfer information to this Mac' window during setup, (it's about the fourth window in), choose 'From Time Machine or other disk' and follow the instructions. Adding the user settings and data that you were using on your backed-up version of the OS to your new Mac at this stage of the setup means that you won't need to create a new user as part of the setup, and avoids the issue of creating multiple user accounts when you only want one. You may receive a warning that some applications (notably Pro Tools) are not compatible with the new system. This can happen even if the new Mac has a system that is actually older than the backup and reinstalling such software from scratch is therefore required.

Once you have restored your new Mac to your satisfaction, make a bootable backup. Unlike the image created from your old Mac, this can be used to restore your new Mac without the above issues because it will be a clone of your new Mac's drive and will therefore be recognised as a valid system.