Q. How do I record an acoustic duo with my setup?

I have a small home setup based around a Yamaha AW4416 multitracker and a Focusrite Penta compressor. Usually, I just record myself, but I've agreed to record a demo for a female vocalist and her guitarist. The problem is that the guitarist has requested that he plugs his guitar (an electro-acoustic model) directly into my system. He wants it to sound like an 'amplified acoustic guitar', not an 'acoustic guitar through a mic'. Have you any idea what this might mean in practical terms? I don't have a separate DI box, only an instrument input on the Penta, with which I was planning to track the vocals. The artists have also said they don't like reverb on the voice, and they don't like compression. It seems that they're after a raw stripped-down sound, which I am tempted to believe is only possible with higher-end gear and a really good recording space. I have asked them to mention specific artists they want to sound like, but I'm not familiar with any of their suggestions.

Editor In Chief Paul White replies: There are a few points to cover here, so let's start with the acoustic guitar. If this has active pickups — that run on batteries — you can record it directly into a line input on your multitracker. If it has a passive pickup of some kind, then you'll need a high-impedance DI box, but these can cost as little as £20, although the more expensive ones tend to handle the low end with greater accuracy. The output of the pickups creates a harder sound than that produced when miking and acoustic guitar, so you shouldn't need to do much to the signal other than adding some compression and reverb. And this is the point where you will have to don your diplomat's hat. 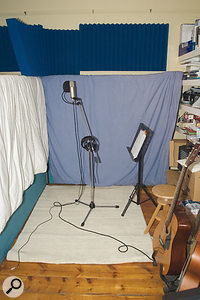 Hanging duvets behind the vocalist will help to reduce the amount of unwanted room ambience being recorded, enabling you to add some sympathetic reverb at a later stage.

You said that your clients "don't like compression", but if you explain to them that you only need a hint of compression to even up the levels, they should be reassured. Using the same level of diplomacy, tell them that, rather than adding reverb, you're going to introduce a little simulated room ambience to make up for the fact that the guitar has been DI'd. An early reflections preset or ambience setting should create the right sense of space without adding overpowering reverb.

Now let's deal with the problem you have with tracking guitar and vocals simultaneously. As your Penta is a preset-based stereo compressor, with no option to split the stereo into two mono channels, you won't be able to record the guitar and the vocal simultaneously, even though it has separate inputs for instrument and microphone, as you rightly point out. However, using a couple of channels on your AW4416, you could record both tracks 'dry', then use the Penta to process them separately at a later date. Doing this will give you more flexibility, as you will be able to audition a number of different compression settings while playing your comped tracks back. (Remember to keep a backup copy of the original vocal!) Use automation to get the level as even as possible, then insert a compressor that trims off only four or five dBs from the peak levels, to take care of the final levelling. You can tell them that this is a normal approach for non-rock music and it will sound very natural. None of the people that they listen to will be recorded with no compression or reverb, even if it sounds that way to the untrained ear.

Finally, you mentioned your recording space posing possible problems. If you find that it's not dry enough, just hang up duvets in a 'U' shape around the back of the singer. Doing this should mop up most of the room reflections. Again, when adding the reverb back to the sound using software, pick a short, ambient type, to give the vocal some sense of space, as recording in a dry room will rob it of any spatial character. With any luck, these things should give you the raw sound you're after. As long as you let your clients vet the effect you add, they should be happy. Just try not to pick anything too obvious!